On 11 December, the Public Defender of Georgia with UN Women’s support presented the findings of its five-year monitoring of gender-based killings of women - femicides - in Georgia. 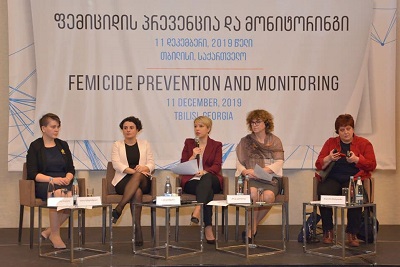 The Public Defender of Georgia with UN Women's support presented the findings of its five-year monitoring of gender-based killings of women - femicides - in Georgia; Photo: PDO

The event provided a space for discussion among representatives of the legislative and executive branches of the Government, the judiciary and international and local organizations. Biljana Brankovic, a member of the Council of Europe’s Group of Experts on Action against Violence against Women and Domestic Violence (GREVIO), underlined the vital importance of preventing femicides and noted that femicide as a form of violence against women presents a human security challenge. Based on UN statistics, the gender-based killings of women “represent a greater threat to human security than global terrorism,” Ms. Brankovic noted.

Femicide is a leading cause of premature death for women globally. Women continue to bear the atrocious burden of lethal victimization in Georgia. “It is necessary that the whole of the State structure commits itself to act with due diligence to prevent, investigate and punish gender-related killings of women,” remarked Erika Kvapilova, UN Women Country Representative in Georgia.

Nino Lomjaria, the Public Defender of Georgia, also stressed: “Despite the decline in the rates of femicide, complex effort is necessary to address systemic shortcomings.”

According to the Chief Prosecutor's Office, 135 murders of women were reported from 2014 to 2018, 64 of which were committed in a domestic context. During the same time frame, there were 69 attempted murders, 46 of which showed signs of domestic violence.

The preliminary findings of the comprehensive analysis of the gender-related killings of women that occurred from 2014 to 2018 were presented at the conference. The report identifies several persistent gaps including the lack of a uniform data-collection methodology as well as deficiencies in identifying the gender motive in such cases. Positive trends include the identification of patterns of systemic violence, the non-application of plea bargains in such cases and the application of increasingly proportional sanctions.

The final report will be released by the end of 2019.