The Legal Committee of the Parliament of Georgia has supported a petition by the women’s movement demanding a tougher response to gender-related killings of women (femicides). 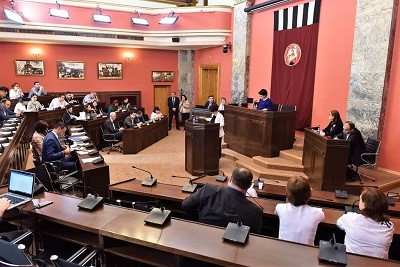 The Committee’s approval means that the Parliament can launch discussions that may lead to relevant changes in the legislation. Signed by over 1,000 supporters, the petition demands increased sanctions for gender-motivated crimes and waiver of the presidential pardon power for femicides and other gender-related hate crimes.

The year 2014 in Georgia was critical to breaking the silence surrounding the intentional killings of women perpetrated mainly by their current or previous intimate partners. In reaction to the unprecedented number of femicides, the President of Georgia declared the year 2015 as the “Year of Women”.

In her 2016 Georgia Report, the UN Special Rapporteur on violence against women, its causes and consequences, Dubravka Šimonović, reiterated the call she made for all States to establish a “femicide watch” or “gender-related killing of women watch”, which would collect and publish annually data on the number of femicides and establish or entrust an existing body to analyse each case of femicide, in order to identify any failure of protection, with a view of improving measures to prevent femicides.

In April 2017, the Public Defender of Georgia (PDO) announced that his office would assume responsibility for monitoring gender-based killings of women in Georgia. In 2018, the PDO presented the preliminary monitoring findings – an analysis of six femicides and four attempted femicides committed in 2016. The PDO analysis identified the gaps in data collection, essential for addressing shortfalls in the protection of survivors. It also called for the introduction of the term femicide in the Criminal Code to facilitate legal qualification of the crime and proportionality of sanctions and the improvement of the victim protection system. The full-fledged PDO report with all findings and recommendations is expected to be accessible to the public in June 2018.

As part of its mandate and with the financial support of the Government of Sweden and the European Union, UN Women Georgia has been working towards enhancing the legal and policy frameworks and improving capacities to respond to and end violence against women. UN Women has been advocating with the Government of Georgia to introduce the concept of gender-related killings into the domestic legislation in line with international best practices. Supported by UN Women, the Ministry of Internal Affairs of Georgia has developed a femicide bill to be sent to the Government for approval in summer 2018.