The Public Defender’s Office of Georgia (PDO) together with UN Women organized a conference to present the “Femicide Watch Report - Analysis of the Criminal Cases Regarding Gender-related Killings of Women Committed in 2016”. 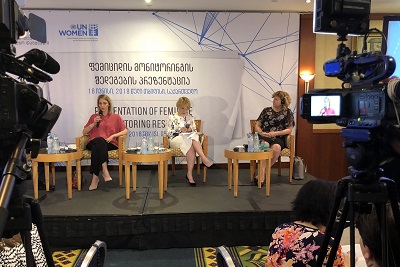 Representatives of the legislative, executive and judicial branches of the government, civil society and other development partners attended the conference. The discussion focused on the methodology for the femicide watch and reviewed the findings and recommendations of the report. While analyzing 11 femicide cases that occurred in 2016, the PDO found that 6 of the 11 women had appealed to the police for protection prior to the femicide occurring. The analysis further found that most perpetrators had no education beyond secondary school and were unemployed. The report also underlines that the gendered nature of violence and discrimination suffered by the victims is not adequately reflected in court judgments. These are only some of the critical findings that will be addressed by the relevant authorities to enhance protection for the victims/survivors and to improve the prevention of femicide.

In her opening remarks Nino Lomjaria, the Public Defender of Georgia, stated: “Notwithstanding the fact that the disclosure of VAWG/DV cases and the number of restraining orders issued have significantly increased in recent years, important systemic shortcomings still remain.”

Erika Kvapilova, UN Women Country Representative in Georgia, further underlined: “The commitment of the Sustainable Development Goals cannot be fulfilled without ending violence against women and duly addressing its extreme manifestation - femicide. It is necessary that the existing systemic challenges are identified and the whole of the state structure commits itself to act with due diligence to prevent, investigate and punish gender- related killings of women.”

Sophio Japharidze, Assistant to the Prime Minister of Georgia on Human Rights and Gender Equality Issues, reiterated that the Government takes a firm stance against all forms of violence against women and that the findings of the report will be addressed. Dimitri Tskitishvili, a member of the Parliament and its Gender Equality Council, stressed that the legislative body is committed to further strengthen the legislative basis regarding VAWG/DV issues.