Civil society engaging in the drafting process of the new National Action Plan on Women, Peace and Security 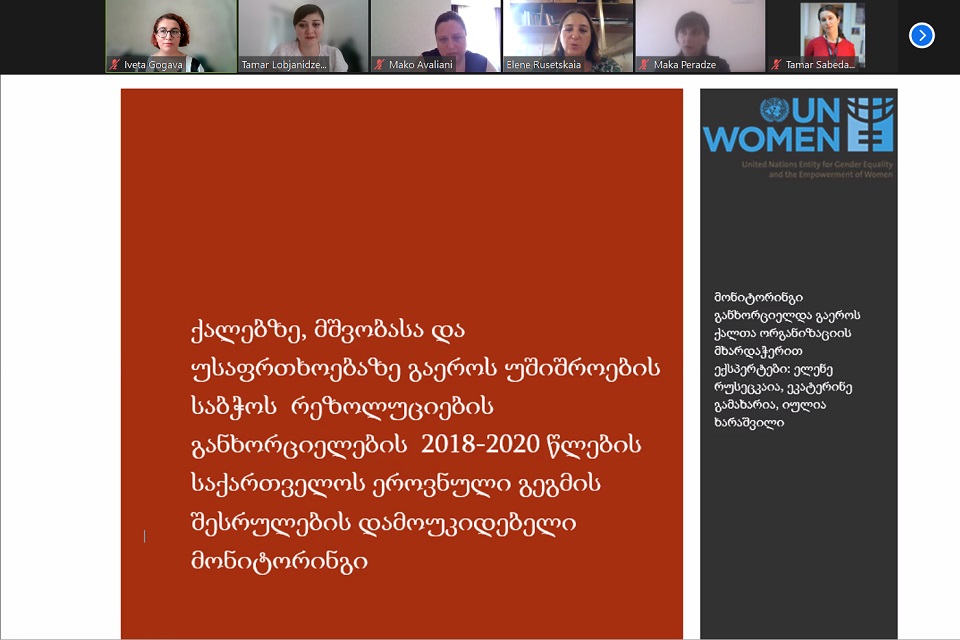 Elene-Maia Rusetskaia is presenting the monitoring results of 2018-2020 National Action Plan (NAP) on the Implementation of the UN Security Council Resolutions on Women, Peace and Security. Photo: UN Women

With the support of UN Women and in cooperation with the Inter-Agency Commission on Gender Equality, Violence against Women and Domestic Violence, a consultation meeting was held with women’s civil society organizations (CSOs) on the development of the fourth National Action Plan for the Implementation of the UN Security Council Resolutions on Women, Peace and Security (NAP).

The findings and recommendations of the independent monitoring of the 2018-2020 NAP undertaken by the women’s CSOs, as well as the results of the NAP monitoring by the Public Defender’s Office, were presented and discussed at the meeting. It was emphasized by the CSO representatives that despite the progress made, the Government needs to strengthen its efforts to implement the NAP, including allocating an appropriate budget for its implementation.

During the consultation meeting, representatives of women’s CSOs discussed the needs and priorities of internally displaced and conflict-affected women. Issues such as ensuring CSO participation in the drafting and implementation of the NAP, localization in target municipalities, access to health care and other essential services, and human security were further discussed.

“I think we should add localization to the new NAP as a separate direction, which reflects the needs of the IDP and conflict-affected population,” noted Elene-Maia Rusetskaia, Chairperson of the Women’s Information Center. “We can include a necessary mechanism that we lack today - coordination and cooperation between the central government and the local municipalities. The Government should assist the municipalities in implementing the NAP.”

At the end of the meeting, the representatives of the women’s CSOs discussed the priority areas and activities that, according to their recommendations, should be reflected in the new NAP.

Consultation meetings with IDP women and those living in villages adjacent to the Administrative Boundary Lines are also planned as part of the NAP drafting process. After these meetings, the NAP will be submitted to the Government of Georgia for final approval.

The consultation meeting was held within the framework of the UN Women project “Accelerating Implementation of the Women, Peace and Security Agenda in Georgia”, generously supported by the Conflict, Stability and Security Fund of the British Government.

Related News
09/07/2021
Drafting process of the fourth National Action Plan of Georgia on Women, Peace and Security launched
22/10/2020
In the words of Nino Berikashvili: “It is central that women participate in peace processes”
24/03/2020
In the words of Ketevan Chumbadze: “Women involved in peace processes provide support for addressing the needs of conflict-affected women”
24/03/2020
CSOs consider gender commissions to improve peace talks
06/08/2019
Georgia integrates gender perspective into the security sector
END_OF_DOCUMENT_TOKEN_TO_BE_REPLACED