In the words of Nino Berikashvili: “It is central that women participate in peace processes” 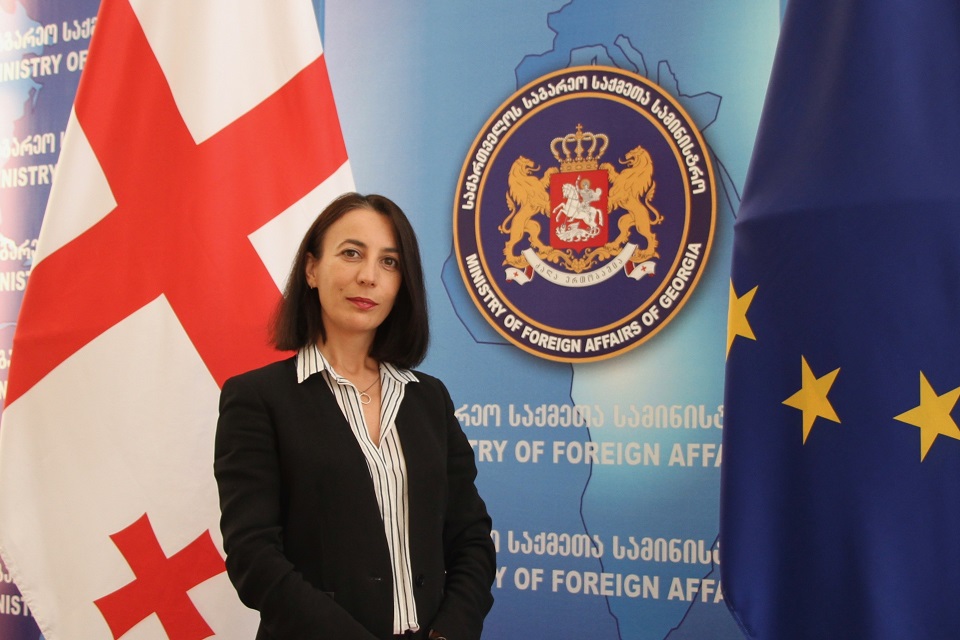 Nino Berikashvili, the head of the Conflict Resolution Policy Division, Political Department at the Ministry of Foreign Affairs of Georgia, is a member of the Georgian delegation to the Geneva International Discussions (GID) and is engaged in the humanitarian working group. At the same time, she conducts a training course on gender and inclusive peace processes at the Levan Mikeladze Diplomatic Training and Research Institute. This course was developed at the Ministry of Foreign Affairs with the support of UN Women and the UK Government’s Conflict, Stability and Security Fund, within the framework of the project “Strengthening Women’s Meaningful Participation in Peacebuilding and Gender Mainstreaming in the Security Sector in Georgia”. It is intended for the staff working at various state agencies on the issues related to peaceful resolution of conflict.

I have had a special interest in the field of security since I was a student, and coincidentally I have been working in this area throughout my professional career. I was involved in peace negotiations between Russia and Georgia, co-chaired by the EU, the UN and the OSCE, four years ago. It was at that time that the Conflict Resolution Policy Division was established in the Political Department of the Ministry of Foreign Affairs, and I was appointed as its head. I think it was a strategic decision to establish a structural unit at the Ministry that would work particularly dedicated to the issues related to peaceful resolution of the conflict, which significantly contributed to enhancing the effectiveness of the peace process and conducting it in an inclusive manner.

The GID is especially difficult process linked with particular responsibilities: you are involved in talks regarding serious security challenges faced by our country and, at the same time, you are dealing with the issues that directly affect the daily lives of conflict-affected people. While security is mostly considered a man’s job around the world and the majority of negotiators are men, I think women have a greater and more special role to play, as the women stimulate inclusive peace processes.

Generally in peace processes throughout the world, putting emphasis on conflict-affected women’s issues is associated with all sorts of difficulties. Of course, when it comes to acute security challenges resulting from occupation, everyone asks, ‘How are women’s issues related?’, or, ‘Why focus on women’s issues?’, but de-occupation and security issues are closely associated with the problems of conflict-affected and displaced women. That’s why during negotiations, we are constantly trying to identify and highlight the humanitarian problems faced by the population living in Abkhazia and Tskhinvali regions, as well as in the villages adjacent to the occupation line, especially the needs of conflict-affected women. Another important aspect to consider is that the voices of women directly affected by conflict-should be heard more distinctly in the peace process in order to achieve an effective result and have a greater impact on every woman’s life. My team and I strive towards this outcome as well.

The integration of humanitarian and women’s concerns into peace negotiations, is certainly well managed with the participation and support of women, as we truly feel the importance of an inclusive peace process in our daily life.

Unfortunately, even 20 years after the adoption of UN Security Council resolution 1325 (2000), great efforts are needed to put words into action. Fortunately, the women’s meaningful participation in peace processes is now increasing worldwide, and more emphasis is being placed on the needs and rights of conflict-affected women. However, for the process to be successful, it is necessary to strive towards raising awareness and inspiring more young professional women, especially through leading by example. Establishing this latest training course serves this purpose and bolsters the involvement of those who are vitally important to participate; that is why I gladly agreed to engage as a trainer at the course. Despite the fact that our country has already taken the initial steps towards this direction, there is still a long way to go. I hope the mentioned trainings will contribute to this path.”