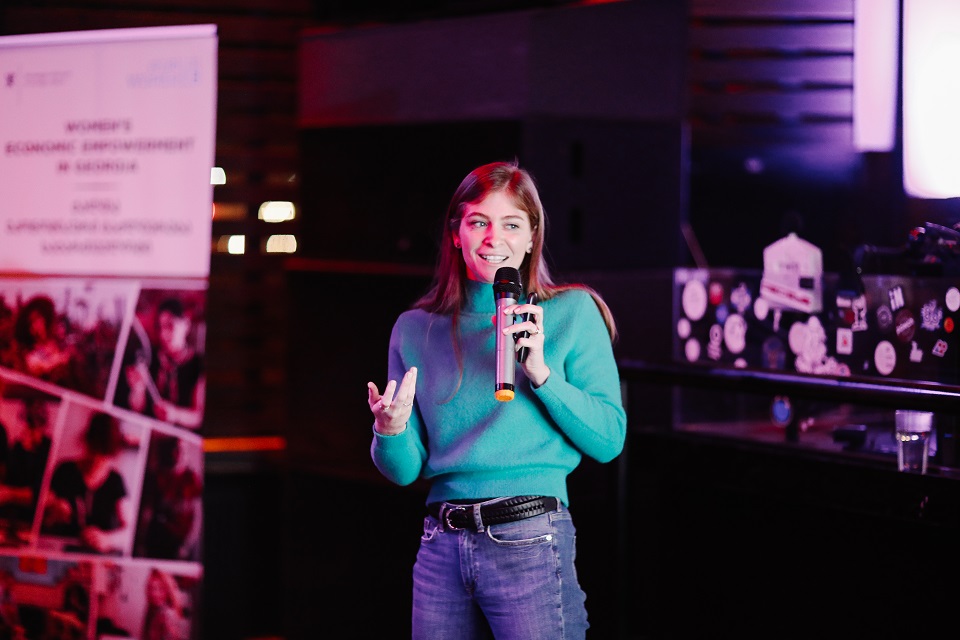 One of the Participants of Fuckup Nights Tbilisi, Nino Kvernadze, shares her experience to the audience. Photo: Natela Asanidze

Failure stories that have been experienced by others often convince people that defeat is not really the end but a unique experience that plays an important role in building a leader. This view was reinforced by successful businesswomen on 19 November at Fuckup Nights in Tbilisi.

The event, organized by Tbilisi Startup Bureau and Impact Hub Tbilisi with the support of UN Women and Liberty, included the participation of five well-known women: Keta Gabunia, founder of the club “Mtkvari”; Irina Egadze, co-founder of the event management and marketing company Alice Q.; Nino Chikhladze, head of HR and administration at Liberty; Nino Kvernadze, director of the Adjara Group; and Natia Panjikidze, founder of the psychotherapy centre “Kamara” and head of the therapy programme. The participants also talked about the obstacles they have overcome in their work and motivated other women with these speeches.

“Any success is based on a certain experience of failure,” said Ms. Kvernadze. “It is a healthy process that makes our lives more diverse and allows us to reflect on the path to professional development. All further progress depends on receiving continuous education and developing skills.”

Fuckup Nights is a global movement and series of events that helps people tell their own stories of professional failure. The movement started in 2012 in Mexico and is currently running in 90 countries and 320 cities around the world. Once a month, three or four speakers gather in different places and tell audiences about their own professional failures. UN Women actively supports initiatives and events that serve to share experiences among women. This support is part of the project “Women’s Economic Empowerment”, funded by the Government of Norway.