UN Women in cooperation with UNDP, UNFPA and the Inter-agency Commission on Gender Equality, Violence against Women and Domestic Violence, conducted a workshop for gender focal points from all of the line ministries represented in the Commission. 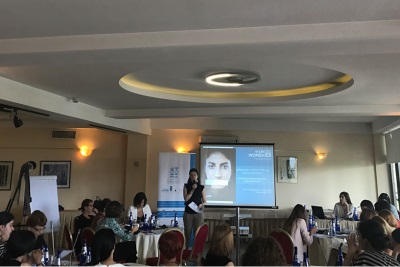 The two-day workshop was held at the Betsy’s Hotel in Tbilisi and aimed to enhance the participants’ results-based management skills and topical knowledge on key women’s rights and gender equality issues, as well as to explore the integration of the nationalized SDG targets in gender equality policymaking. The gender focal points, representing all of the state entities in the Inter-agency Commission, also discussed lessons learned from the development and implementation of the previous cycles of gender equality and women’s empowerment national action plans as well as international and local best practices.

“The knowledge and skills gained within the framework of the workshop will inform the Inter-agency Commission’s work this fall as it embarks on the journey to develop three thematic national action plans for the period from 2018 to 2020,” stated Sophio Japaridze, Assistant to the Prime Minister on Human Rights and Gender Equality Issues. The three action plans to be developed are (1) the National Action Plan on the Measures to be Implemented for Combating Violence against Women and Domestic Violence and Protection of Victims/Survivors; (2) the National Action Plan on the UN Security Council Resolutions on Women, Peace and Security; and (3) the Gender Equality chapter of the Governmental Action Plan on the Protection of Human Rights.

“This workshop has really helped us to think through our agencies’ inputs and responsibilities vis-à-vis the National Action Plans, both process and content-wise,” noted Irma Aladashvili, head of the Legal Provision, Public Relations and Donor Relations Department of the State Fund for the Protection and Assistance of Victims of Human Trafficking. At the end of the workshop, the work schedule for the drafting of the Action Plans was finalized to foresee development of the first drafts in the first half of October, followed by extensive consultations with civil society and other development partners until the NAPs’ finalization by the end of November 2017.

The Inter-agency Commission on Gender Equality, Violence against Women and Domestic Violence was formed in June 2017 with the mandate to cover issues such as supporting the effective implementation of functions and coordination of activities of respective state bodies in the field of gender equality, violence against women and domestic violence. The Commission also supports the development of proposals on these issues and submits them to the Government of Georgia for their review and further action. It is noteworthy that the Commission is a coordinating body envisaged in Article 10 of the Istanbul Convention; thus, among other tasks, it observes the implementation of issues covered by the Convention.

Related News
02/08/2017
Inter-agency Commission on Gender Equality, Violence against Women and Domestic Violence now operational
25/11/2020
Georgian private sector to support the 16 Days of Activism against Gender-Based Violence
10/07/2020
New strategy under way on gender equality and gender mainstreaming for local authorities
28/05/2020
Gender policy and challenges for local government bodies
06/12/2018
Children in Georgia’s regions introduced to fairy tale collection “Once There was a Girl”
END_OF_DOCUMENT_TOKEN_TO_BE_REPLACED