The first session of the Inter-agency Commission on Gender Equality, Violence against Women and Domestic Violence was held at the Administration of the Government of Georgia. 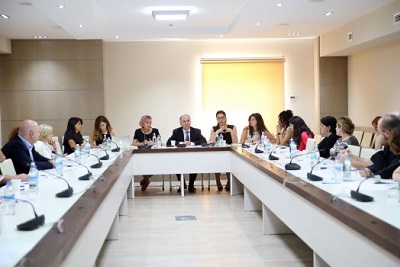 The first session of the Inter-agency Commission on Gender Equality, Violence against Women and Domestic Violence; Photo: Women's Information Center

Task Force members discussed essential steps and future plans for ensuring gender equality and elimination of violence against women and domestic violence. They also talked about forming three thematic groups that will involve NGOs together with state agencies.

Mr. Gocha Lordkipanidze, co-chair of the Commission and Deputy Minister of Justice, stated that the creation of thematic groups will be consistent with the implementation of key segments and action plans that fall within the Commission mandate, noting: “We are talking about the action plans on gender equality, violence against women and domestic violence, as well as the realization of commitments under UN Security Council resolution 1325.”

It was mentioned at the session that coordinated work of agencies is very important for meeting the objectives envisaged under the Commission mandate. After the session, MP Mr. Dimitri Tskitishvili noted: “It is important that the agencies are coordinated to ensure efficient implementation and monitoring of current plans in this respect. The first session of the Commission was focused on planning our activities correctly, agreeing on and planning the actions that will be followed up by the Commission members. We will do our best to facilitate this process and to have this activity supported by the Parliament.”

The Commission on Gender Equality, Violence against Women and Domestic Violence was formed with advocacy and technical support from UN Women and other UN agencies. It unites representatives of Ministries as well as the Public Defender’s Office, the Legal Aid Service, the Public Broadcaster, the Gender Equality Council of the Parliament and the Supreme Court.

The Commission mandate covers gender equality, violence against women and domestic violence, as well as other issues on the implementation of the UN Security Council resolutions on Women, Peace and Security. In addition, the Commission will address issues such as supporting the effective implementation of functions and coordination of activities of respective state bodies in the field of gender equality, violence against women, domestic violence and women’s empowerment. The Commission will also support the development of proposals on these issues and submit them to the Government of Georgia for their review and further action. It is noteworthy that the Commission is a coordinating body envisaged in Article 10 of the Istanbul Convention; thus, it will observe the implementation of issues covered by the Convention. UN Women will continue its technical support to the Commission in the future as well.

Related News
23/09/2017
Inter-agency Commission plans for transformative changes to gender equality policymaking
25/11/2020
Georgian private sector to support the 16 Days of Activism against Gender-Based Violence
10/07/2020
New strategy under way on gender equality and gender mainstreaming for local authorities
28/05/2020
Gender policy and challenges for local government bodies
11/02/2020
Ask an activist: Why was there a need to adopt the Beijing Declaration and Platform for Action?
END_OF_DOCUMENT_TOKEN_TO_BE_REPLACED