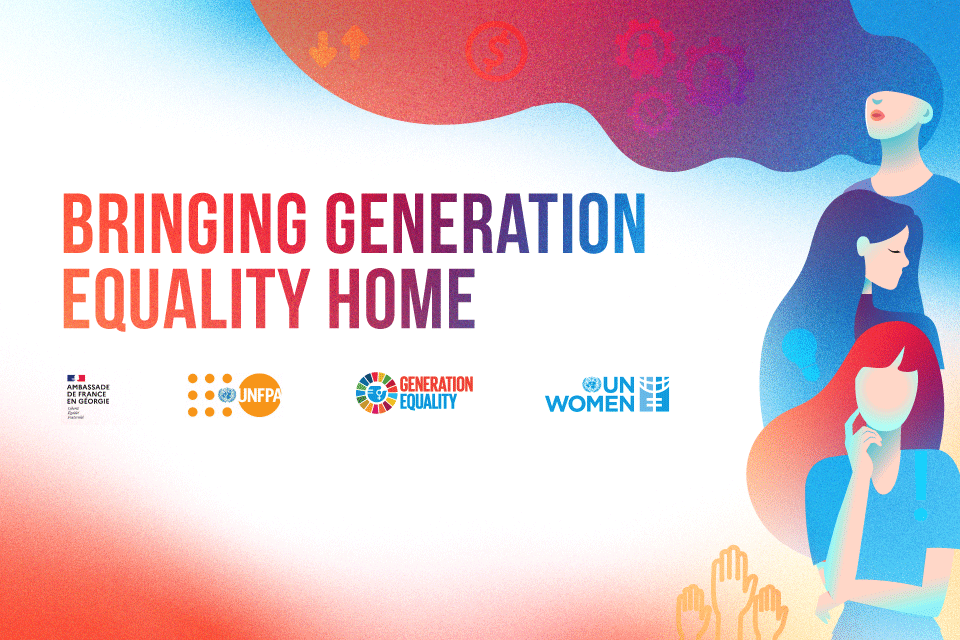 The French Embassy in Georgia and the offices of UN Women and the United Nations Population Fund presented the global Generation Equality movement at the Civil Society Forum.

The forum “Generation Equality Movement for the Local Context” was held online on 11 March as part of Gender Week. Its aim was the introduction of the global movement, its integration into the Georgian reality and the engagement of civil society in this process.

According to the UN Resident Coordinator, Sabine Machl, the Generation Equality movement “gives us an opportunity to rethink the commitments made by States to protect women’s and girls’ rights at the 1995 Beijing Conference. Right now is the historic moment when we need to analyse what has been done, how far we have come, what remains a challenge still and, at the same time, how to better take future steps to ensure that every woman and girl has the opportunity to live with dignity and protection. We all need to work together to achieve gender equality.”

Solidarity and coordinated action are of crucial importance in overcoming the pandemic crisis and in building an inclusive and sustainable world, where gender equality is the driving force behind policies, development programmes and daily life. That is why UN Women, the United Nations Population Fund and the Embassy of France, together with non-governmental and governmental partners, will work concurrently to develop the Generation Equality movement in Georgia.

The Ambassador of France to Georgia, His Excellency Mr. Diégo Colas, underlined France’s commitment to gender equality, stating: “It has been President Macron’s decision to make gender equality a priority for the French Government and its foreign policy. At a time, when due to the pandemic, women’s rights have become expressly restricted, France remains strongly committed to the idea of equality.” To illustrate this commitment, Mr. Colas briefly outlined the initiatives that France is taking to promote and protect gender equality within the Generation Equality Forum. He also announced the annual prize of the French Embassy in Georgia, which will be dedicated to the promotion of universal access to sexual and reproductive health and rights in 2021, which is one of the most topical issues for women and girls.

The online forum was attended by representatives of civil society and women’s rights organizations, gender thematic groups, UN agencies, and international and donor organizations. The participants also received weblinks to enable them to register for the Mexico City Online Forum and Action Coalition.