Ask an activist: Why was there a need to adopt the Beijing Declaration and Platform for Action? 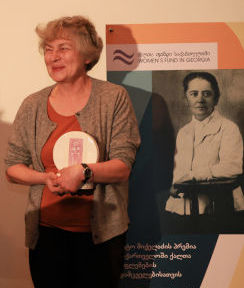 Marina Tabukashvili is Head of Georgia’s Taso Foundation, the National Women`s Fund and the Memory Research Center. She tells us why the Beijing Declaration and Platform for Action, a visionary agenda to empower women and girls, was adopted in 1995, and discusses what prevents women from realizing their rights today.

“The Beijing Declaration and Platform for Action, an agenda for women`s rights and gender equality, was and is still necessary for women to have the opportunity to fully participate in social, economic and political life.

I would like to draw attention to gender equality issues that we still face here in Georgia. I believe that a decentralization of power that would bring mechanisms for defending women’s rights closer to grassroots communities would go a long way to empowering women, promoting their economic rights and building a culture of social justice.

As an activist for gender equality and women’s rights, my message to the new generation of women and men activists from Georgia is: ‘Continue to learn from your own and others’ experiences, including local women, rooted in their own community contexts. I encourage young activists to work together with people, rather than for people.’

I hope that during the Beijing+25 sub-regional and regional consultations that we will shift from the question of “What to do?” to “How do we do it?” Specifically, how do we mobilize local communities and contribute to women’s leadership? How do we support local governments to foster independent democratic institutions? How do we promote a culture of volunteerism? How do we share resources and motivate a culture of peace, democracy and justice?”

This story is part of the regional media campaign “12 voices. 12 journeys. 12 women from 12 Europe and Central Asia countries”. Passionate about gender equality and women`s rights, explore aspects of the 12 critical areas of the Beijing Platform for Action: poverty; education and training; health; violence; armed conflict; economy; power and decision-making; institutional mechanisms; human rights; media; environment; and the girl child. On the eve of 2020 and the 25th anniversary of the 1995 Beijing Declaration and Platform for Action, these 12 women are reimagining economies, societies and political systems to achieve gender equality. Imagine a world where gender equality is the norm. These women do.