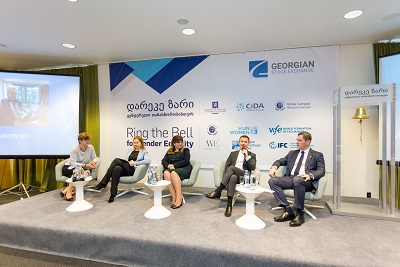 The gender gap is a significant challenge for growth and prosperity in all countries. According to recent estimates, global GDP could increase by up to $5.3 trillion by 2025 if the gender gap in economic participation closes by 25 per cent over the same period. “Narrowing the gender gap can help drive growth and improve the lives of many families, which is why IFC and its partners have joined forces to promote women’s economic participation and leadership in the private sector,” said Jan van Bilsen, IFC Regional Manager for the South Caucasus.

The event provided space for discussions about the role of the private sector in Georgia in empowering women at work, in the corporate value chain and in the community, highlighting the “business case” for gender equality. The representatives of the Government, regulatory bodies, the private sector, NGOs and UN agreed that public-private partnerships are essential for successfully addressing challenges, including persistent gender stereotypes, and scaling up women’s economic opportunities and empowerment. 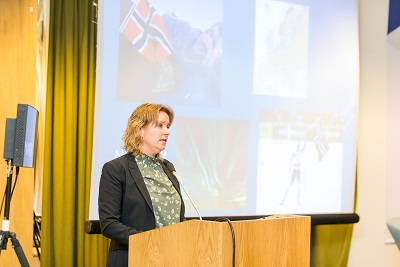 Lena Vonka, a successful health-sector entrepreneur who has over 130 employees - mostly women - shared details on her experience in Norway; Photo: CiDA

Lena Vonka, a successful health-sector entrepreneur who has over 130 employees - mostly women - shared details on her experience in Norway, where focus on women’s empowerment and gender equality contributes to the sustainability of businesses.

UN Women Country Representative Erika Kvapilova underscored that women’s empowerment is not only an essential human rights imperative and a precondition of sustainable development, but also can bring many benefits to the corporate value chain, in which women play important roles as suppliers, contractors, distributors, employees and customers.

Part of a global campaign launched four years ago, this year’s “Ring the Bell for Gender Equality” event in Tbilisi was the first time it was held in Georgia and attracted over 70 representatives of the private sector, Government, international community and local NGOs. The event was generously supported by the Norwegian Ministry of Foreign Affairs through the UN Women-led two-year programme “Joint Action for Women’s Economic Empowerment in Georgia”.

Related News
25/06/2021
In the words of Tamar Ioseliani: “Women are empowering the maritime industry”
28/04/2021
UN Women launching a campaign in support of the economic empowerment of women farmers
11/03/2021
Gender equality is being integrated into the activities of more and more organizations
02/07/2020
Nona Noniashvili: A young entrepreneur in Georgia who is planting seeds to help a conflict-affected community grow
25/06/2020
Mentoring for women’s empowerment: UN Women presents mentoring manual
END_OF_DOCUMENT_TOKEN_TO_BE_REPLACED