The Chief Prosecutor’s Office, in cooperation with the UN Women Country Office in Georgia, organized a conference to present its analysis of domestic crimes and femicides. The trends, achievements and challenges in fighting domestic violence were meticulously discussed. 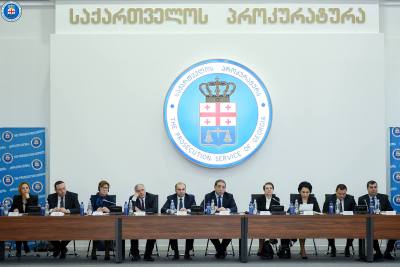 “The fight against domestic violence is one of the priorities for the Prosecution Service of Georgia,” noted Chief Prosecutor Shotadze. “We pursue strict criminal law policy with regards to such incidents. The 2017-2021 Strategy of the Prosecutor’s Office of Georgia includes a separate chapter on fighting family crime along with efficient prosecution emphasizing the importance of preventing domestic crime as well as its reoccurrence.”

The findings of the analysis of domestic crimes illustrate that as a result of the preventive measures taken and the improvement of the quality of prosecutorial supervision, the rate of reporting domestic violence by victims/survivors and the rate of launching criminal prosecutions have increased significantly.

The policy towards the perpetrators has become stricter; the rate of requesting detentions as a restrictive measure has increased significantly, from 14 per cent in 2014 to 79 per cent in 2017 (6 months). Cases of using alternative measures to criminal prosecution (diversion) and plea agreements has been minimized. Detection of psychological violence has also improved. The Prosecutor’s Office pays special attention to studying the history of violence as well as relevant administrative case materials involving a perpetrator, if any, for the purposes of detecting patterns of systemic violence.

The Chief Prosecutor’s Office further stressed the importance of capacity development of prosecutors. With the support of UN Women, a group of specialized prosecutors has been trained for the purposes of effective investigation and timely response to the crimes. Witness and victim coordinators, who ensure support to the victims/survivors of domestic crimes by providing relevant services during the course of criminal proceedings, have also been trained on domestic violence issues. The Prosecutor’s Office pledged to formalize specialization of prosecutors on VAWG/DV cases.

The partnership between UN Women and the Chief Prosecutor’s Office has been launched in 2014 in the framework of the UN Joint Programme for Gender Equality (funded by the Government of Sweden and implemented by UNDP, UNFPA and UN Women).