Gender Equality High on the Agenda of the Ministry of Defence

The Ministry of Defence of Georgia (MoD) is working towards adopting a set of procedures that will outline how to make and handle complaints about unacceptable behaviour, including bullying, sexual discrimination, sexual harassment, domestic violence and sexual abuse. It is the next step in the implementation of the internal MoD Gender Equality Strategy adopted in 2013. 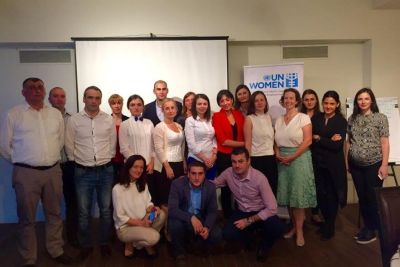 Workshop on Complaints Mechanism with participation of Ministry of Defence Military police, General Inspectorate, Gender Devisors, National Defence Academy and Gender Equality Monitoring Team; Photo: UN Women
The initiative further falls in line with the efforts to implement commitments undertaken by the Government of Georgia under the 2016-2017 National Action Plan of Georgia for the Implementation of the UN Security Council resolutions on Women, Peace and Security, which includes, among others, a commitment to create an enabling environment for the increased participation of women in the security sector.

On 19 and 20 September 2016, UN Women, in close cooperation with the Geneva Centre for the Democratic Control of Armed Forces (DCAF) and with the support of the Government of Australia, organized a workshop in Tbilisi to discuss the initial draft of the Complaints Mechanism.

“At present, there are several ways of filing complaints on different forms of discrimination at the Ministry of Defence, including through the Inspectorate General or via hotline, e-mail and a box for complaints,” noted Maka Petriashvili, Deputy Department Head of Human Resources Management and Professional Development and the Head of the Gender Equality Monitoring Team at MoD. “Complaints are quite rare, yet this should not be a ground for complacency and believing that harassment and bullying does not exist in the Armed Forces. It is important to have clear and standardized procedures for filing and addressing such complaints. Such mechanism is of paramount importance for protecting and promoting gender equality in the security sector.”

Salome Intskirveli, Chief Specialist of the Internal Audit Department at MoD who participated in the workshop, further stressed the importance of introducing the Complaints Mechanism in the MoD system: “I believe we need to change the mindset and encourage employees to file cases of inappropriate behaviour,” she said. “In addition to decreasing unacceptable behavior in the workplace, it will also empower victims and underline the importance of respecting and protecting human rights everywhere.”