Nata Bekauri came to the Pankisi Gorge in Duisi village – located in Georgia’s eastern Kakheti region and mainly populated by the Kist ethnic minority – at the age of 16. Her parents had decided to send her to Georgia after the Chechen War, having just graduated from school at the time. In Georgia, she lived with her grandmother and planned to continue her studies in foreign languages. One day, her relatives told her that the time had come for her to get married and that they had chosen the son of one of the prominent families of the Gorge as her future husband. 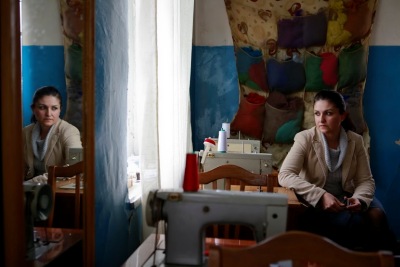 Nata Bekauri; Photo: UN Women/Maka Gogaladze
“I wasn’t even given a chance to get to know him well,” Nata recalls. “When I was getting married, they promised that they wouldn’t hinder my studies, which turned out to be mere words. They didn’t engage me in family business, either; cleaning and cooking were my only chores. Yet, I wanted to study and become a normal person. When I realized that this opportunity was being taken away from me and my youth was passing by, I decided to ignore public opinion and leave my husband.”

Her marriage only lasted for five months. Her parents, who had moved from Russia to Georgia by that time, supported her decision. Nata then managed to prepare for and gain admission to the foreign languages faculty at Ilia State University. During her education, she spent three years in France studying French language and literature. After returning to Georgia, she remarried. Nata is now 38 years old, has a 5-year- old son and lives in Akhmeta, working as a project assistant at the Kakheti Regional Development Fund (KRDF). She says that she had to overcome numerous obstacles due to stereotypes rooted in society. “Had I paid attention to society, I would have been stuck where I was,” Nata adds. “My relatives disapproved of my active way of life, but I ignored that. I knew what I wanted to accomplish, and I shaped my life myself.”

Early marriages were especially common in Nata’s generation. Sometimes young girls were even married off without ever having seen their future husbands. Such a practice is less common today. However, the marriage of girls between the ages of 16 and 17 remains prevalent. The traditional stereotype still persists in the Gorge, that a girl is ready for marriage after having graduated from school.

Religious leaders are extremely respected in the Pankisi Gorge. Therefore, the decision recently made by the Imams of the traditional Islamic mosques with regard to early marriages is of the utmost importance. According to this decision, marriages among youths under the age of 18 will no longer be endorsed religiously. It should be noted that the Council of Women Elders of the Pankisi Gorge have played a key role in the making of this decision. The Council was established in 2011 under an initiative by KRDF and supported by UNHCR. Since its establishment, it has cooperated actively with UN Women. The Council consists of 18 members and is aimed at women’s rights protection and advocacy with the Council of Men Elders. The Council is a mediator between the local women and the elderly men, trying to present women’s interests in a proper way and to contribute to decision-making in their favor.

Another problem related to early marriages is the school dropout rate. According to Marina Gumashvili, acting head of the Akhmeta regional department of the Social Service Agency, three of her classmates had married early; one of them divorced before graduation, and none of them have completed their education.

Marina is one of the women in Pankisi who did not marry early. She graduated from the law school of Tbilisi State University and has an MA in Public Law. She did not drop her studies even after having returned to the Gorge, she passed the bar examination in criminal and civil law and also became a certified official of the election administration.

Notwithstanding the surrounding reality, education has always been a top priority in Marina’s family. Both of her sisters also graduated from university. Her father, assistant-professor Suleiman Gumashvili, has always been supportive of her, unlike her brothers, who often objected to her pursuit of education.

“Without my father’s support, I would have failed,” Marina says. “Sadly, not all fathers manage that. Some brothers force their sisters to give up education and to get married immediately after having graduated from school. Education was not the only issue we disagreed on. They were opposed to the length of my dress and to my employment, too. Yet, I didn’t surrender. It is a problem for many people to date. Most of the local girls, having completed their education, are working in the school or are unemployed. It is very rare for them to find a job outside the Gorge.”

Marina got married at the age of 24 to her husband Kist. While Marina is at work, her husband is the one taking care of their two children after preschool. According to Marina, there is no alternative to education. 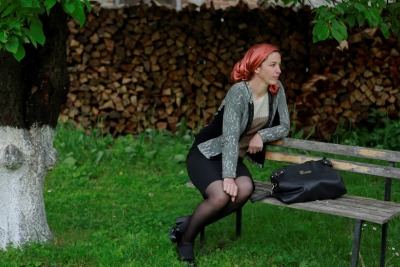 Marina Gumashvili; Photo: UN Women/Maka Gogaladze
“If I hadn’t completed my education and had gotten married after graduating from school, my life would probably be miserable,” Marina says. “Apart from financial issues, this way I can realize my potential and not be confined to the home for 24 hours each day. I can go out and socialize. Education made me independent. When you are independent, you are more appreciated. I will do anything to make sure that my children receive an education.” Marina is now studying English. Her current job is just the beginning for her. There is one thing she is striving for – she dreams of becoming a prosecutor.

Unfortunately, the prevalence of early marriages is still high in Georgia. According to the 2015 Special Report of the Public Defender of Georgia, “Early Marriages: Challenges and Solutions”, 611 marriages were registered among youths between the ages of 16 and 18 that year. Moreover, 408 juveniles between the ages of 13 and 17 dropped out of school due to marriage. According to GEOSTAT, 13% of girls aged 16-19 (9% urban and 18% rural) are married, while only 2% of boys in the same age group are (the number of married boys is the same in urban and rural areas).

According to the Civil Code of Georgia, marriages are admissible from the age of 18. The Government of Georgia is carrying out complex measures to combat the problem of early marriages. In 2015, the Ministry of Education and Science of Georgia amended its policies to allow for the tracking of early school dropout causes, which has made it possible to partially measure the prevalence of early marriages. As of January 2016, marriages of juveniles under the age of 16 with parental consent are no longer admissible.

The relevant legislation has been amended to comply with the recommendation of the CEDAW Committee. Currently, as an exception, marriages of juveniles under the age of 16 are only admissible with their consent and with a court’s approval due to exceptional circumstances, such as pregnancy. This exception will be abolished in January 2017, thereby completely banning marriages under the age of 18.

In the meantime, a variety of measures to eliminate early marriages in Georgia are being carried out as part of the implementation of international obligations undertaken with regard to women’s rights. In response to UN Women’s call to world leaders to “Step It Up” at the “Global Leaders’ Meeting on Gender Equality and Women’s Empowerment: A Commitment to Action” on 27 September 2015 in New York – where world leaders committed to ending discrimination against women by 2030 and announced concrete and measurable actions to kick-start rapid change in their countries – the then Prime Minister of Georgia Irakli Gharibashvili addressed ending early marriages among other top priorities of the country. He noted that, “We will expand the institutional mechanisms on gender, for which purpose an inter-agency commission equipped with necessary resources will be established under my leadership. We will continue the reform of our justice system. Furthermore, we will ratify and implement the Istanbul Convention. We will work with our development partners, the UN and civil society to combat early marriages in a joint effort. We will launch information campaigns on such priority issues as ending violence against women and girls and domestic violence, as well as preventing early marriages.” The Prime Minister further stressed that the Government of Georgia is striving towards a future with a higher level of equality and welfare.

The march towards change continues. Apart from these institutional measures, the existing traditional perceptions and customs in the Pankisi Gorge need to be changed and modernized, including with regard to early marriages. Nata Bekauri believes that the Imams’ decision will be one of the key stimulating factors in this effort.