“Rugby is a power game”, “Rugby is not the right game for women”; these stereotypes are widespread in Georgia, dividing sport into two categories: those sports which are feminine and those which are masculine. Although rugby is very popular in Georgia and Georgian rugby players have many fans, women’s rugby is less developed and very few people know of any Georgian female rugby players. 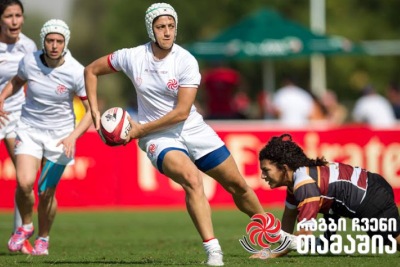 Ana Poghosian, captain of the Women's National Sevens Team; Photo: Jan Perlich
Stereotypes are one of the causes of this. Despite this, the Georgian Women’s National Sevens Team (also known as Georgia Lady 7s) has been quite successful in Europe.To overcome these stereotypes, also to promote women’s rugby and encourage female rugby players, traditionally, UN Women is awarding the best female rugby player of the year on the Georgian Rugby annual award ceremony.

At the award ceremony on March 16, at Expo Georgia, the Georgian Rugby Union (GRU), representatives of the Georgian rugby community and the media summarized the achievements of Georgian rugby in 2015 and presented awards to the best players. UN Women awarded a special prize to Ana Poghosian, captain of the Women’s National Sevens Team. It is noteworthy that she also received this award last year.

Women’s rugby originated in Georgia in 2005 and she has been in this sport ever since. The Georgia Lady 7s played their first European Championship in 2008 under Ana’s captainship. She came to rugby from football, but says that from the first time she played rugby, she was addicted. “I came here one day and stayed here. There is so much emotion and adrenaline here. Some people think that strength is key in rugby, but this is an interesting and challenging sport that more requires thinking and speed,” says Ana.
Ana is also a referee at the “Didi 10”, top tier Georgian championship. Like other female rugby players of her generation, she wants to be a role model and get many more girls interested in the sport. “Some people do not understand at all how a girl can play rugby, which is a problem of mentality; and this is misleading. There is no gender in sports. There is no sport, which cannot be played by women. Events and incentives, as well as this award, are very encouraging and promote women’s rugby and raise public awareness about it,” says Ana.

The Georgian Rugby Union has been a long standing partner of UN Women, within the framework of the UN Joint Programme for Gender Equality, which is generously funded by the Swedish Government (and implemented by UNDP, UN Women and UNFPA). This cooperation is aimed at increasing men’s engagement in the fight against violence against women and girls.