By continuously reporting on news that supports the advocacy of women’s issues, media representatives can play a huge role in raising the general public’s awareness and in changing their attitudes. 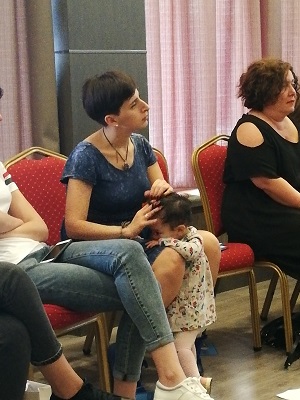 The participant of the workshop, the journalist of online media outlet "Tabula" Khatia Ghoghoberidze with her one-year old daughter; Photo: Ramaz Samkharadze

For this reason, UN Women regularly supports local journalists regarding gender-sensitive reporting about women’s issues and, from time to time, organizes information meetings on this topic.

This time, UN Women’s two-day workshop with the media was attended by 19 media representatives. The participants became familiar with UN Women’s initiatives and the research findings on women’s low economic activity in Georgia, including the causes and effects of their involvement in the informal economy. Emphasis was laid on such issues as women’s economic empowerment and the role they can play in the economic advancement of the country.

“We hardly ever find news about women’s economic empowerment in the media,” noted Tatia Khaliani, a journalist for the publication Liberali. “Consequently, this event was equally important for the journalists who work primarily on gender and economic issues. I received much notable information that I will definitely work on. I am especially interested in women’s right to ownership and existing inequality in regard to the distribution of property, which generates many problems for women.”

One part of the meeting was dedicated to the media’s role in advocating for women’s issues and to gender-sensitive coverage. This discussion was led by Nino Danelia, professor at Ilia State University, who remarked: “The media can greatly influence the formation of public opinion. This is why it is important that the entire media organization, ranging from owners and management to the journalists and the staff of the advertising department, acknowledge very well that gender-sensitive reporting is a necessary professional standard for the media today.”

At the end of the meeting, Shorena Darchiashvili, deputy director general of the company M2, presented initiatives to the media representatives that the company has implemented to support women’s economic empowerment since signing the Women’s Empowerment Principles (WEPs).

UN Women plans to conduct similar events for the journalists working in the regions. Meetings with the media are taking place within the framework of the project “Joint Action for Women’s Economic Empowerment”, implemented by UN Women with the financial support of the Ministry of Foreign Affairs of Norway.

Related News
09/01/2023
Wishes fulfilled with new knowledge
14/12/2022
Conference held by UN Women on business supporting an equal and diverse work environment
13/12/2022
Armenian, Azerbaijani and Georgian women entrepreneurs share their experience with one another
07/11/2022
Dusheti municipality to implement a gender sensitive budget
26/10/2022
In the words of Vivia Gurgenishvili: “Compared to men, women entrepreneurs have limited access to financial resources in Georgia.”
END_OF_DOCUMENT_TOKEN_TO_BE_REPLACED