UN Women and the European Union support a number of initiatives that aim to raise awareness among the youth on gender equality and domestic violence issues. 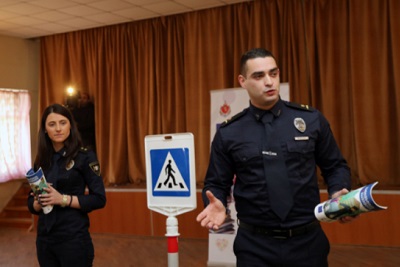 In the frameworks of the project "10 Lessons of Safety" patrol inspectors Tamuna Migineishvili and Levan Tsiklauri discuss issues related to safety; Photo: The Ministry of Internal Affairs

One such initiative is the project “10 Lessons of Safety”, implemented in 54 public schools throughout Georgia in partnership with the Ministry of Internal Affairs and the Ministry of Education and Science. The training programme aims to prevent crime among minors and raise their awareness on public order and safety issues, including gender equality and domestic violence. Almost 5,000 students attended the programme.

Within the framework of the project, trained staff of the patrol police, Emergency Management Agency and Emergency and Operative Response Center 112 would deliver 10 lessons on public order and safety issues. Through a guidebook prepared for this purpose, they informed the students about such topics through the use of respective role plays, Q&A sessions, exercises and other educational activities, as well as sharing many interesting cases from their practical experience.

One of the project’s instructors, patrol inspector Ketevan Elerdashvili, remarked that the classes were productive: “Despite their young age, the children have already become aware of violence and discrimination. Nevertheless, through this project we were able to name each action properly through real cases. We discussed what a child can do if he or she witnesses violence, as well as how a police officer keeps public order.”

Supported by UN Women, 108 patrol-inspectors delivered the training on gender equality and domestic violence issues within the framework of the project, and 600 copies of the guidebook “10 Lessons of Safety” were distributed to help all participating instructors inform the children about discrimination, types of violence, domestic violence and bullying, and other topics in language accessible to children. The initiative was implemented within the framework of the EU-funded project “Unite to Fight Violence against Women”.