From where I stand: "Women can make meaningful contributions to the development of Wikipedia" 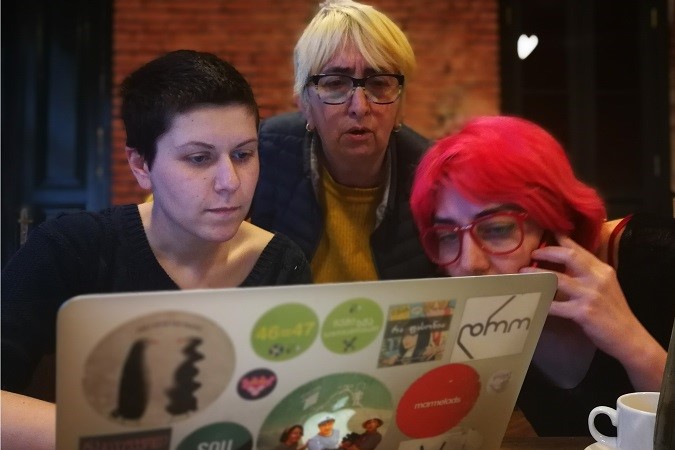 In the center Tsangala Tsagareishvili-Ahbe sharing experience on how to write for Wikipedia; Photo: UN Women

I had brought the Georgian Soviet Encyclopedia with me to Germany, so I decided to transfer information from the encyclopedia to Wikipedia. I remember the first essay I wrote on 16 February 2005 - it was about composer Valerian Tsagareishvili. So I became one of the first Georgian female Wikipedians.

Later on, I met other editors of Georgian Wikipedia. In the beginning, I had some technical difficulties. My husband helped me acquire computer skills, while one of the Georgian editors assisted me in learning the specifics of Wikipedia. Slowly but surely, my experience progressed.

I always spare a lot of time to the online encyclopedia. When you work on Wikipedia, you learn a lot of information that contributes to your own personal growth.

Whenever I visit Georgia, my fellow Wikipedia editors and I gather together. I am the only woman at such meetings. Unfortunately, today there is a lack of female editors on Georgian Wikipedia: volunteer girls join us to be very active for a while, but afterwards they become passive and some forget about Wikipedia altogether. However, they could do much more for the online encyclopedia by applying their skills. Even if they correct one letter or one word, that would still be a contribution to the development of Georgian Wikipedia. As they continue to make such contributions, they may find that they wish to increase their involvement. I would like to encourage as many women as possible to get involved in the creation of content on Georgian Wikipedia, and I will always support such an initiative.

Tsangala Tsagareishvili-Ahbe, 59, is a teacher by profession and is the most active female editor of Georgian Wikipedia living in Germany. Since 2005, she has been continuously involved in the development of content on the online encyclopedia. Ms. Tsagareishvili-Ahbe joined the edit-a-thon dedicated to #WikiGap, which was organized by the Swedish Embassy in Georgia, Georgian Wikipedia and UN Women, on 8 March 2018 in Tbilisi for the future Georgian female editors. At the event, she shared her experience with the other participants on how to write for Wikipedia and how to become one of its editors. Her activities significantly contribute to reaching Sustainable Development Goal 5, to achieve gender equality and improve opportunities for all women and girls.