On International Women’s Day, with the purpose of reducing gender inequality in Wikipedia, Georgia joined the global initiative #WikiGap for the first time. 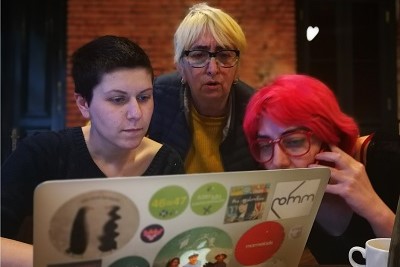 Georgian Wikipedia representatives sharing experiences on how to write for Wikipedia and how to become editors of the online encyclopedia; Photo: UN Women

Globally, 90 per cent of Wikipedia’s editors are men, and it has four times more content about men than women. #WikiGap, a joint initiative of the Ministry of Foreign Affairs of Sweden and the Wikimedia Foundation, aims to address this gap. The initiative is focused on two areas: involving more female editors and increasing the amount of content about women in Wikipedia.

With the initiative of the Swedish Embassy, Georgian Wikipedia and UN Women, a #WikiGap edit-a-thon was held in Tbilisi for the future female editors of Wikipedia. Erika Kvapilova, UN Women Country Representative in Georgia, and Eric Salmgren von Schantz, Deputy Head of Mission of the Embassy of Sweden in Armenia and Georgia, opened the event.

Georgian female researchers, bloggers and journalists participated in the edit-a-thon. Representatives from the Georgian Wikipedia shared their experiences with the participants, specifically on how to write for Wikipedia and how to become editors of the online encyclopedia. 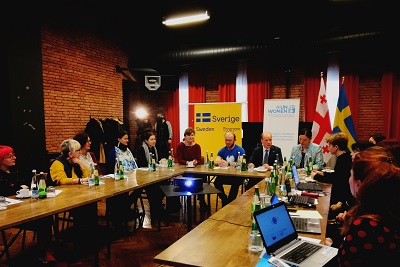 “The Georgian Wikipedia reflects global statistics precisely: about 90 per cent of our volunteers are men,” noted Mikheil Chabukashvili, administrator of the Georgian Wikipedia. “Usually, it is primarily male volunteers who come to us. This is why it is very important to work on encouraging women. I am sure that the edit-a-thon participants will continue working actively in Wikipedia and will become prominent Wikipedians too.”

At the end of the edit-a-thon, the nine trained editors uploaded materials to the Georgian Wikipedia about famous or previously unknown women. Lana Mushkudiani, one of the participants, remarked: “There are women in Georgia who were fighting for women’s rights, for example, Babilina Khositashvili - a Georgian feminist writer, translator, poet and advocate of women’s and workers’ rights. However, most people are not aware of her name, which is why we need to use all available opportunities to ensure that the broader public can access materials about her. I am happy that I created an article about Babilina in Wikipedia during today’s edit-a-thon.”

To promote #WikiGap, the Swedish Embassies have been organizing worldwide edit-a-thons on 8 March, International Women’s Day. This year, more than 50 countries hosted an edit-a-thon.