Three businesses were recognized for their efforts to promote women’s empowerment and gender equality at an awards ceremony organized by Millennium Challenge Account (MCA) Georgia in cooperation with UN Women. 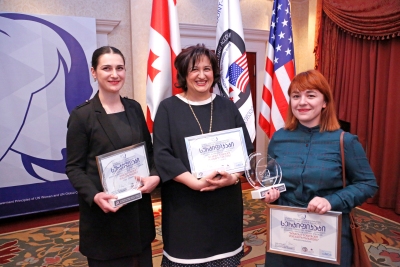 Representatives of Black Sea University, Dio and Geocell accepting their awards at the Business for Gender Equality Awards Ceremony; Photo: MCA
Thirty-two companies took part in the Business for Gender Equality Competition, held for the second year in a row, on 9 March 2017 in Tbilisi. The competition and awards ceremony recognizes companies that have taken action and achieved positive results in removing barriers to women’s participation in the labour market, promoting women’s access to and positions in male-dominated fields, and providing training and professional development opportunities for women, including marginalized groups of women. The competition builds on the joint UN Women/UN Global Compact Women’s Empowerment Principles and especially promotes the fourth principle, which focuses on training and professional development for women.

The awards ceremony took place on 9 March 2017 in Tbilisi. In his opening remarks, Nicholas Berliner, Deputy Chief of Mission of the US Embassy, stated: “There is much to be proud of when it comes to promotion of gender equality in Georgia, but clearly much more has to be done. I hope to see many more women in leading positions in the public and private sector in Georgia in the coming years, and the business case is clear; it has been shown again and again that businesses that include women in a meaningful way are more successful.”

Tinatin Nadareishvili, Ethics and Compliance Manager of Geocell, upon receiving the prize declared: “Geocell tries to promote gender equality internally as well as in the wider society. Yesterday, on International Women’s Day, we signed the Women’s Empowerment Principles and are now inspired to work even harder for promoting women’s rights and empowerment.”

Erika Kvapilova, UN Women Country Representative, closed the event reiterating that much remains to be done to achieve gender equality but stressed: “It is extremely encouraging for us to see such strong support for gender equality in the business community in Georgia. You, as business leaders, have tremendous possibilities to economically empower women, prevent discrimination and harassment in the labour market and promote the sustainable and just development of the country.”

Related News
06/04/2022
UN Women expanding its strategic partnership with the private sector
02/12/2016
Private companies take action to achieve gender equality
25/06/2021
In the words of Tamar Ioseliani: “Women are empowering the maritime industry”
28/04/2021
UN Women launching a campaign in support of the economic empowerment of women farmers
11/03/2021
Gender equality is being integrated into the activities of more and more organizations
END_OF_DOCUMENT_TOKEN_TO_BE_REPLACED