At a conference in Tbilisi, five private businesses shared their future plans for promoting gender equality and the empowerment of women, formalized in action plans based on the Women’s Empowerment Principles (WEPs). 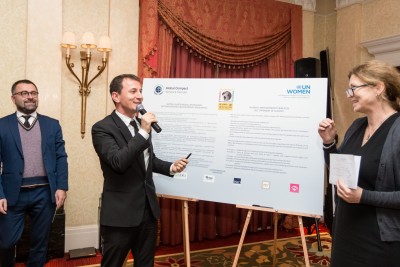 Valeri Chkheria, CEO of Adjara Group Hospitality, was one of six CEOs to sign the Letter os Support for the Women's Empowerment Principles; Photo: Civil Development Agency
The conference, organized by UN Women and the Civil Development Agency (secretariat of the UN Global Compact Network in Georgia), was the culmination of a process during which five small, medium and large Georgian companies assessed their policies and operations from a gender perspective, identified gaps, set goals and developed action plans for their realization, all with UN Women support.

The Deputy Minister of Economy and Sustainable Development, Ms. Ketevan Bochorishvili, applauded the initiative, stating that “Women’s participation in the private sector is high in Georgia, but gender stereotypes often prevent women from fully realizing their potential. The leadership that the companies here today are showing is also a recognition that gender equality is increasingly seen as an important factor for business success.”

The companies – Adjara Group Hospitality, the microfinance organization Crystal, the PR and marketing firm GEPRA, the real estate company m2 and the Georgian American University– presented their action plans. These include internal efforts such as encouraging men to take time off for parental leave, promoting women’s participation in male-dominated professions and establishing complaints mechanisms for cases of discrimination as well as external efforts such as targeting women-owned businesses in procurement and creating employment opportunities for marginalized groups of women.

Valeri Chekheria, CEO of Adjara Group Hospitality and Head of the Board of the UN Global Compact Network, specified some of the challenges that his hotel business faces in a mountainous region of Georgia: “Certain professions are not seen as appropriate for women, and women find it difficult to take on a paid job because they are expected to primarily manage the household. Awareness-raising on women’s rights is essential for changing these attitudes.”

Erika Kvapilova, UN Women Representative, underlined that achievement of the ambitious development plans of the Government of Georgia, including the nationalized Sustainable Development Goals, is impossible without active involvement of businesses: “Mainstreaming gender in companies’ operations helps not only to increase their profits but also prevents gender-based discrimination and improves the overall performance of society.”

The CEOs of the five companies signed the Letter of Support for the WEPs, while an additional three – KPMG, CREDO and Georgian Business Zone – committed to endorsing the WEPs, making a total of 10 WEPs signatories in Georgia.

Related News
09/03/2017
Private sector pioneers recognized for gender equality action
06/04/2022
UN Women expanding its strategic partnership with the private sector
25/06/2021
In the words of Tamar Ioseliani: “Women are empowering the maritime industry”
28/04/2021
UN Women launching a campaign in support of the economic empowerment of women farmers
11/03/2021
Gender equality is being integrated into the activities of more and more organizations
END_OF_DOCUMENT_TOKEN_TO_BE_REPLACED