The UN Joint Programme for Gender Equality (funded by the Government of Sweden) hosted a high-level meeting in Tbilisi on ending violence against women and girls within the framework of the 16 Days of Activism. 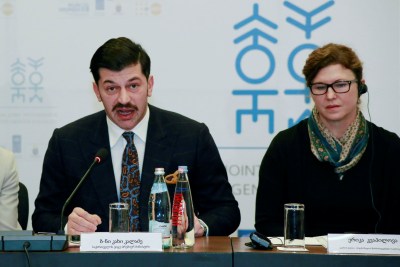 The Deputy Prime Minister of Georgia making his opening speech at the high-level meeting; From left to right Kakha Kaladze, the Deputy Prime Minister of Georgia, Erika Kvapilova, UN Women Country Representative in Georgia; Photo: UN Women/Maka Gogaladze
Members of the Parliament, the Government of Georgia, ambassadors and representatives of international organizations and civil society organizations took stock of the progress made in achieving gender equality and preventing and combating violence against women and girls.

“We should do our best to ensure that every woman and girl in Georgia is safe and free from violence,” declared Kakha Kaladze, the Deputy Prime Minister of Georgia. “We have to focus more on prevention and start working on it from early childhood, at schools, with the involvement of relevant professionals.”

Head of the Council of Europe’s Office in Georgia Cristian Urse commended the Government for progress made towards addressing violence against women and girls through recent legislative amendments. He also underlined the importance of ratifying the Council of Europe Convention on Preventing and Combating Violence against Women and Domestic Violence (also known as the Istanbul Convention), which Georgia signed in 2014. “The Istanbul Convention provides an effective framework for addressing violence against women and girls and domestic violence in a holistic and coordinated manner,” Mr. Ursenoted.

Sophio Kiladze, Chair of the Human Rights and Civil Integration Committee of the Parliament of Georgia, expressed her believe that the newly elected parliament will proactively contribute to combating gender-based violence in Georgia. 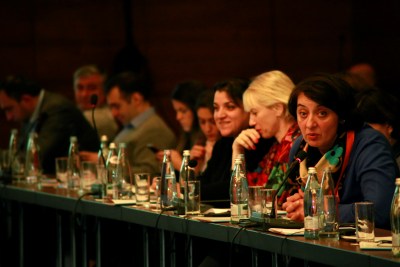 Eliso Amirejibi, women's rights activist posing question at the high-level meeting; Photo: UN Women/Maka Gogaladze
Sophio Japaridze, Assistant to the Prime Minister of Georgia on Human Rights and Gender Equality Issues, presented an account of work done by the executive branch of the Government that indicated the steps to be taken by the Prime Minister’s Office in 2017, including the institutionalization of a national mechanism on gender equality that aims to end violence against women and domestic violence.

The meeting also provided an opportunity for the Public Defender’s Office to highlight areas of improvement as well as for the representatives of women’s NGOs to advocate for the establishment of a specialized unit on ending violence against women and domestic violence within the Ministry of Internal Affairs. Such a unit, according to their views, would play a significant role in preventing domestic violence and femicides resulting from domestic violence abuse cases.

“We are looking forward to next year’s meeting to mark further progress in making Georgia a country free of gender-based violence,” stated UN Women Representative Erika Kvapilova in her closing remarks.