Gender Equality in the Framework of Corporate Sustainability

Women face various forms of discrimination in the workplace, such as discrimination in the hiring process, barriers to advancing on the career ladder as well as problems with receiving equal pay for work of equal value. Such discrimination exists despite the fact that women outnumber men as graduates of higher education institutions in Georgia. Evidence, however, shows that a non-discriminatory workplace, a diverse workforce and a greater representation of women at all levels increases an organization’s effectiveness and profitability. These were some of the key points made in a panel discussion on gender equality in workplaces, which took place in the framework of an international Corporate Social Responsibility(CSR) Conference in Tbilisi. 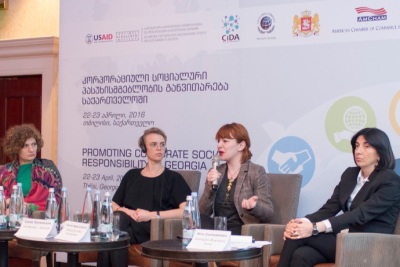 The “Promoting Corporate Social Responsibility in Georgia” conference, brought together representatives from the Georgian government, those of international organizations and businesses and civil society actors for two days of discussions on corporate sustainability in the context of the Sustainable Development Goals, the Deep and Comprehensive Free Trade Agreement between the EU and Georgia and the launch of the UN Global Compact Local Network in Georgia.

The gender dimensions of corporate sustainability was one of the issues discussed in the conference. Carin Goransson, from the UN Women Country Office in Georgia presented the Women’s Empowerment Principles (a joint initiative of UN Women and the UN Global Compact) and explained why women’s empowerment in the workplace is important: “Empowering women in the workplace is important, first because women’s rights are human rights, but also because evidence shows that it contributes to sustainability of the companies. Still, women tend to be economically disadvantaged and continue facing various barriers in the labour market and in the workplace. Businesses can play a key role to turn this situation around, and actively empowering women in the workplace has proven to be a good business decision”.

Tinatin Nadaireshvili, a panelist from the NGO “Article 42 of the Constitution,” focused on discrimination in the hiring process. She was highly critical of job advertisements that announce positions for “single, pleasant-looking women” and job interviews aimed at selecting suitable (female) candidates based on their marital status and children. Nino Zambakhidze, the Executive Director of the company “Georgian Business Zone”, advocated for the empowerment of women and especially of those living in rural areas and provided examples about how her company (and communities) benefits from policies aimed at women’s economic empowerment.

The Georgian labour market is highly sex-segregated. Women are almost 20 percentage points less economically active than men; they are over-represented in lower paying sectors and positions, resulting in a gender wage gap of 34.8% (compared to the global average of 24%); sexual harassment in the workplace remains a taboo issue (however the issue has received increased attention in recent years) and the traditional division of work in the family and gender stereotypes are still prevailing, especially in rural areas. Achieving equality in the labour market and at the work place is the joint responsibility of various stakeholders such as the government, trade unions and employers. The participants of the conference agreed that businesses can significantly contribute to achieving gender equality in the workplace, in the market place and in the community by exploring and supporting women’s talent as well as by introducing a policy of zero tolerance to sexual harassment. In addition, according to the participants, businesses can contribute to gender equality and sustainable development through promoting women to leadership positions and company boards, by creating favorable working conditions for employees with family responsibilities and by including more women in the supply chain.

The “Promoting Corporate Social Responsibility in Georgia” conference was organized by the Civil Development Agency, the Global Compact Network Georgia and the Human Rights Secretariat of the Georgian Government on April 22-23.

Related News
25/06/2021
In the words of Tamar Ioseliani: “Women are empowering the maritime industry”
28/04/2021
UN Women launching a campaign in support of the economic empowerment of women farmers
11/03/2021
Gender equality is being integrated into the activities of more and more organizations
02/07/2020
Nona Noniashvili: A young entrepreneur in Georgia who is planting seeds to help a conflict-affected community grow
25/06/2020
Mentoring for women’s empowerment: UN Women presents mentoring manual
END_OF_DOCUMENT_TOKEN_TO_BE_REPLACED