The private sector is the largest employment sector in Georgia, and private businesses can play a crucial role to promote gender equality. To boost private sector engagement for the empowerment of women inside and outside of companies, UN Women in Georgia conducted two trainings in April on the Women’s Empowerment Principles (WEPs) for 30 business representatives, in collaboration with the Georgian Microfinance Association and the International Chamber of Commerce (ICC) in Georgia. 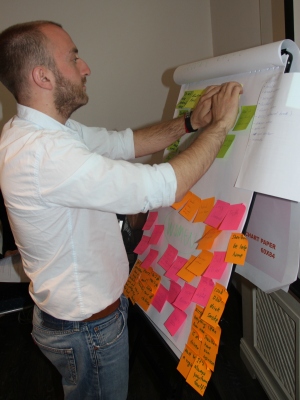 UN Women in Georgia conducted two trainings on the Women's Empowerment Principles(WEPs) for business representatives; Photo: UN Women
Gender equality and the empowerment of women are central to the Sustainable Development Agenda, not only as goals in and of themselves but also as the means to achieve sustainable societies for all. However, progress to achieve gender equality has been slow. In Georgia, women’s labour-force participation stands at 57%, compared to 77% for men (GeoStat, 2015), and the vertical and horizontal segregation of the labour market clearly disfavors women, who are over represented in lower-paying sectors and positions. In this context, UN Women in Georgia is partnering with private sector actors to increase their understanding of gender equality and of the role that businesses can play to propel women’s empowerment.
The trainings on gender equality and women’s empowerment delivered by UN Women in Georgia are based on the WEPs (jointly developed by UN Women and UN Global Compact). One of the first groups to participate in UN Women’s WEPs-based training was the Georgian Microfinance Association, representing 20 microfinance institutions. The training functions as a follow-up to a 2013 study conducted by UN Women in Georgia with some of the Association’s members that analysed the accessibility of financial services for women. Iuri Lebanidze, Executive Director of the Association, explains why they organized the WEPs training for their members: “Gender equality is an important issue all over the world. For our members, it is a priority and we have included reference to the Women’s Empowerment Principles in our Code of Conduct. We see this training as part of our implementation of this Code.” 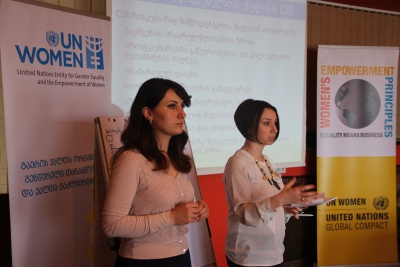 UN Women in Georgia conducted two trainings on the Women's Empowerment Principles(WEPs) for business representatives; Photo: UN Women
Globally, the private sector is increasingly recognized as a key player not only to drive economic growth but also to promote sustainable social development, and companies are being held to account for their impact on societies. At the national level in Georgia, corporate social responsibility (CSR) is a topical issue with great potential for increased implementation. Within the framework of promoting corporate sustainability, the International Chamber of Commerce (ICC) in Georgia partnered with UN Women to offer the WEPs training for its members. Sixteen company representatives participated in the training, which covered issues such as anti-discrimination, gender-responsive supply chain management and sexual harassment. Mariam Khokhobaia, Deputy Secretary-General of ICC, expressed her impressions after the training: “Many companies understand CSR as charity, but we see a need to raise awareness on how to incorporate CSR considerations including gender equality at all levels in companies. We would like to offer the WEPs training to more of our members so that they have access to practical guidance on how to empower women through their business operations.”

The training for the Georgian Microfinance Association took place on 27 April and included 14 participants – CEOs, financial directors, and administrative and HR managers, among others – from microfinance institutions such as FINCA Bank, MFO BIG and MFO Creditplus. Sixteen participants – including CEOs and PR and external affairs managers from companies such as PricewaterhouseCoopers, KPMG and GM Investment Group – engaged in the training organized with ICC on 25 April.