UN Women makes it a high priority to support its partner organizations in gaining greater sensitization and awareness on gender equality and sexual harassment issues. 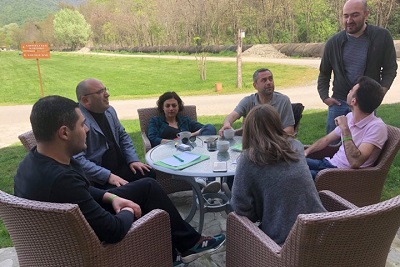 Participants of the workshop working in groups; Photo: UN Women

To this end, the entity has begun conducting awareness-raising trainings for the organizations with which it cooperates under various projects.

The first such training was held for the staff of the Academy of the Ministry of Finance of Georgia from 14 to 16 April 2019 and addressed the current situation in Georgia regarding gender equality, gender stereotypes, the prioritization of women’s economic empowerment and other related issues. The meeting placed special emphasis on sexual harassment and the mechanisms necessary for the prevention of sexual harassment within organizations. Twenty-four participants attended the meeting.

“The training content was somewhat new for the team at the Academy of the Ministry of Finance, which made it even more interesting and made us more engaged,” remarked Academy director Tariel Chulukhadze. “Based on the information received during the training, the Academy is now working on a document that will help prevent sexual harassment, support its elimination and ensure that those associated with the Academy are made aware of this issue.”

It is noteworthy that UN Women will continue to hold trainings for its partners on gender equality and sexual harassment, after which it will help the organizations develop a sexual harassment complaints mechanism as well.

The initiative is part of the project “A Joint Action for Women’s Economic Empowerment”, implemented by UN Women with the financial support of the Government of Norway.