Partnering with GEOSTAT to improve gender statistics in Georgia

The National Statistics Office of Georgia (GEOSTAT) took its work on gender statistics to another level by launching an electronic Gender Data Portal at the end of 2018. 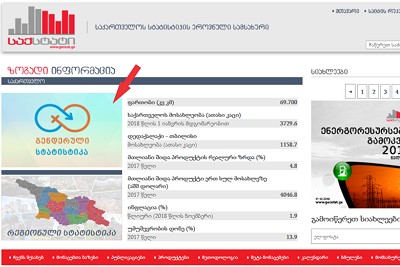 The National Statistics Office of Georgia took its work on gender statistics to another level by launching an electronic Gender Data Portal; Photo: GEOSTAT

This bilingual (English and Georgian) Portal can be accessed from GEOSTAT’s official web page (geostat.ge) as well as directly by clicking here.

The Portal, along with the latest statistical publication “Women and Men in Georgia”, has been developed with UN Women technical support, and reflects the observations and recommendations of gender data users collected by GEOSTAT through a series of consultation meetings.

“Excelling in the production and dissemination of gender statistics is one of GEOSTAT’s priorities. The Gender Data Portal not only presents data in a user-friendly format, but also allows visitors to access relevant GEOSTAT datasets for further scrutiny and elaboration,” stated Gogita Todradze, Executive Director of GEOSTAT.

For the first time, in the latest publication of “Women and Men in Georgia” in cooperation with UN Women, GEOSTAT has made linkages between its gender data and the relevant gender indicators of the Sustainable Development Goals. Also for the first time, “Women and Men in Georgia” as well as the Gender Data Portal, feature findings from the National Study on Violence against Women in Georgia conducted by GEOSTAT and UN Women, with financial support from the EU, in 2017.