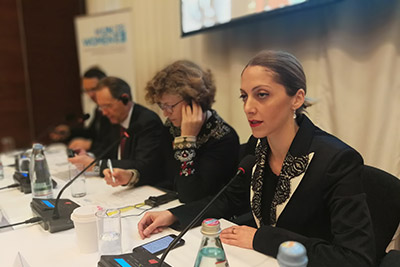 Sopho Japaridze, Assistant to the Prime Minister on Human Rights and Gender Equality Issues presented her opening remarks at the launch of the Project. Photo: UN Women

Recent national data shows that even if women are more likely to have higher education than men, women’s participation in the labour force in Georgia is significantly lower than men’s, with a 27-percentage point gap among the working-age population. The data suggests that the main reasons for women’s economic inactivity are the gendered division of labour in society and the associated unpaid care work burden that women bear. On average, women report spending 45 hours a week on homemaking (UN Women, CRRC 2018). The situation is not much different in other South Caucasus countries.

On 10 December, UN Women, the Swiss Agency for Development and Cooperation (SDC) and the Austrian Development Agency (ADA) launched the regional project “Women’s Economic Empowerment in the South Caucasus” (WEESC), a three-year initiative aimed at supporting the poor and socially excluded women in Armenia, Azerbaijan and Georgia to gain economic independence and participate in local decision-making.

The project will support women in selected regions across all three countries – improving their capacities and skills, access to information and essential services. Olivier Burki, SDC Regional Director for the South Caucasus, said that “women’s economic empowerment is not only the right thing to do but is also the smart thing to do”, underlining women’s participation in the economy as essential for economic growth and sustainable development.

The WEESC project supports the national gender machineries of Armenia and Georgia in carrying out changes at the policy and institutional level to ensure gender mainstreaming in legislation, state policies and programmes and to ensure that appropriate data is collected. To develop the institutional capacity for gender mainstreaming, the project will use tools like Participatory Gender Audits, Gender Impact Assessments and Gender Responsive Budgeting (GRB). Head of the ADA Georgia Office, Gerhard Schaumberger, said that GRB is an important tool that “seeks to ensure that the allocation of public resources is carried out in ways that contribute to advancing gender equality and women’s empowerment”.

The project will also provide technical support to private companies in Armenia and Azerbaijan to adopt the Women’s Empowerment Principles (WEPs), building on UN Women Georgia’s experience working with the private sector since 2016.

WEESC is implemented by UN Women Georgia, in close partnership with UNDP (in Armenia and Azerbaijan) and funded by SDC and ADA. Similar to the Regional Project Launch Tbilisi, the project was presented in Baku, Azerbaijan on 4 December and in Yerevan, Armenia on 13 December.

Related News
09/01/2023
Wishes fulfilled with new knowledge
14/12/2022
Conference held by UN Women on business supporting an equal and diverse work environment
13/12/2022
Armenian, Azerbaijani and Georgian women entrepreneurs share their experience with one another
07/11/2022
Dusheti municipality to implement a gender sensitive budget
26/10/2022
In the words of Vivia Gurgenishvili: “Compared to men, women entrepreneurs have limited access to financial resources in Georgia.”
END_OF_DOCUMENT_TOKEN_TO_BE_REPLACED