Several impressive stories about women from different walks of life were presented by UN Women, in partnership with the Noosfera Foundation, at the “Woman in Focus” documentary film festival, held 4-6 March 2016 to mark International Women’s Day. 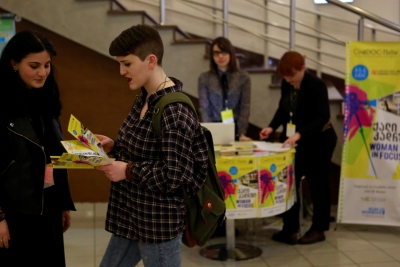 Opening of the Film Festival "Woman in Focus"; Photo: UN Women/Maka Gogaladze
Erika Kvapilova, UN Women Country Representative in Georgia, attended the opening ceremony of the festival and gave her welcoming remarks, saying, “The underlining theme of International Women’s Day 2016 - 'Planet 50-50 by 2030' – reminds us about the persisting inequalities between men and women in most parts of the world, and about the various barriers women and girls face – just because they are women or girls – when they want to follow their dreams: for example the 16 –year old Iranian girl, Sepideh; the heroine of the film, who wants to be an astronomer.”

The documentary films presented during the 3-day film festival were mostly directed by female film directors from a variety countries, including Denmark, Georgia, Israel, Poland and Belgium and focused on women’s and girls’ lives and rights. Archil Khetaguri, head of the Noosfera Foundation and founder of the ‘CinèDoc’ International Documentary Film Festival, said, “I am convinced that documentary films have the unique power to change society for the better: they move us, they present us with real people, who become our imaginary friends and remain in our memory for a long time." 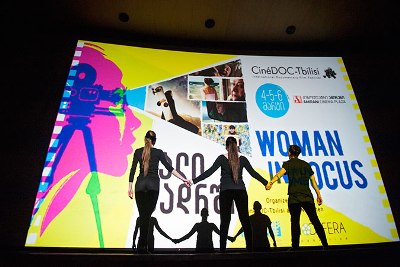 Opening of the Film Festival "Women in Focus"; Photo: UN Women/ Eana Korbezashvili
Ana Abashidze, a women’s rights activist and director of the non-governmental organization 'Partnership for Human Rights', gave her thoughts on the films, saying, “These are amazing and unforgettable stories, as they concern eternal values and remind us of the barriers and discriminatory stereotypes that women face in different parts of the world, including Georgia.”

The festival opened on March 4 at the Amirani Cinema, with the film “Sepideh”, by Danish director Berit Madsen. Screenings were followed by discussions, where the audience had an opportunity to exchange views with Georgian women’s rights and human rights activists.