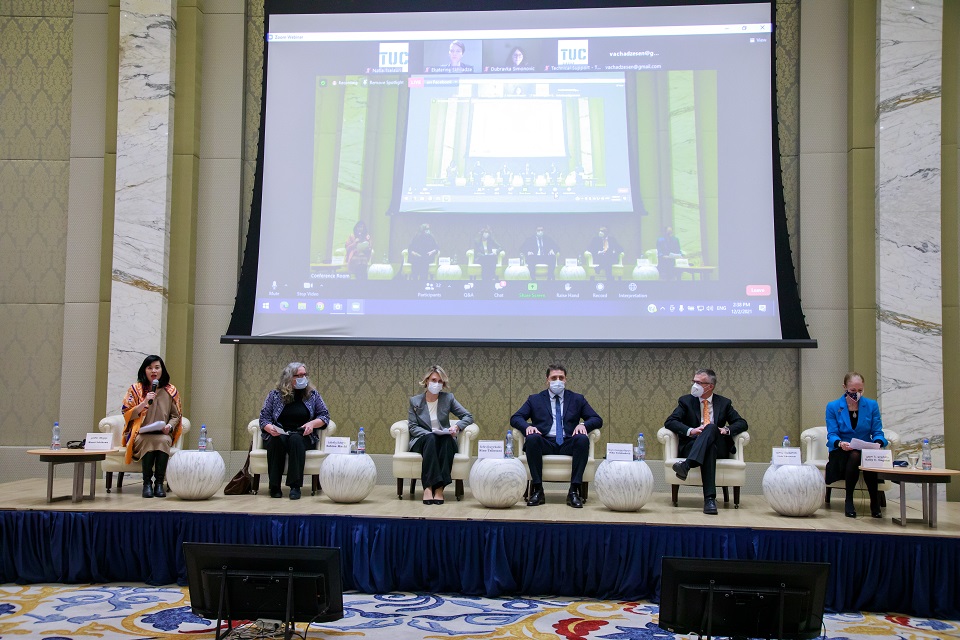 The improvement of access to justice was a topic of the high-profile meeting held on 2 December 2021. Photo: UN Women/Leli Blagonravova

Sexual violence is one of the most hidden offences in Georgia. According to the 2017 National Survey on Violence against Women, 9 per cent of women experienced sexual violence in childhood, although the rate of reporting is low. For instance, in 2020, investigations were started for only 31 cases of rape, while the courts have heard only 22 of the cases.

One of the reasons behind such a grim reality is that the legislation of Georgia requires amendments, and access to justice requires improvement. In addition, women’s silence about rape is provoked by existing erroneous views and societal attitudes, which often blame victims for what happened to them.

Due to this challenge, the focus of the 2021 campaign for the 16 Days of Activism against Gender-Based Violence is on combating sexual violence. The improvement of access to justice was a topic of the high-profile meeting held on 2 December 2021.

Representatives of the legislative and executive branches of the Georgian Government, the diplomatic corps and international and local non-governmental organizations attended the meeting, organized by UN Women and the UN Gender Theme Group.

H.E. Sabine Machl, UN Resident Coordinator in Georgia, opened the event, stating: “We join an effort aimed at the elimination of violence against women and girls, and we support the Georgian Government in implementing international commitments in the area of human rights, including the obligations supporting gender equality and combating violence against women and girls.”

Ambassador of Sweden to Georgia Ulrich Tideström stressed the importance of the topic: “We need to speak about sexual violence. And we need to act. We owe it to the victims. And we owe it to all women and girls who shouldn’t have to become victims of sexual violence. A key part must be to improve the access to justice. This also contributes to prevention by sending crystal clear signals that sexual violence is unacceptable and that perpetrators will be brought to justice. This is a global fight. We are in it together. The time to act is now! Count on Sweden’s continued support.”

Participants noted that distinct political will and relevant regulations are required to improve access to justice. They discussed such issues as making the elimination of sexual violence a priority, harmonizing the national legislation with the Istanbul Convention and other international standards, and applying best practices for the prevention of sexual violence against women, among other important topics.

On behalf of the Parliament of Georgia, Chair of the Gender Equality Council Nino Tsilosani expressed support in the fight aimed at the elimination of violence against women and noted that provisions of the criminal law on rape require harmonization with the Istanbul Convention. “This, as well as other proposals against violence, will definitely be initiated by the Parliament,” she stated. “In cooperation with the non-governmental sector and with strong donor support, Georgia will continue progressing to combat this global challenge.”

The high-profile meeting was held within the framework of the UN Joint Programme for Gender Equality, implemented with the support of the Swedish Government.

Related News
11/12/2021
What would you tell me? - UN Women campaign against sexual violence
30/11/2021
Private sector joins global 16 Days of Activism against Gender-Based Violence campaign
22/11/2021
Take Five: “We must raise awareness, to change society’s attitudes towards violence against women and to prevent such crimes”
10/11/2021
Private sector fighting against domestic violence
13/10/2021
UN Women intensifies initiatives to address violence against women in Guria
END_OF_DOCUMENT_TOKEN_TO_BE_REPLACED