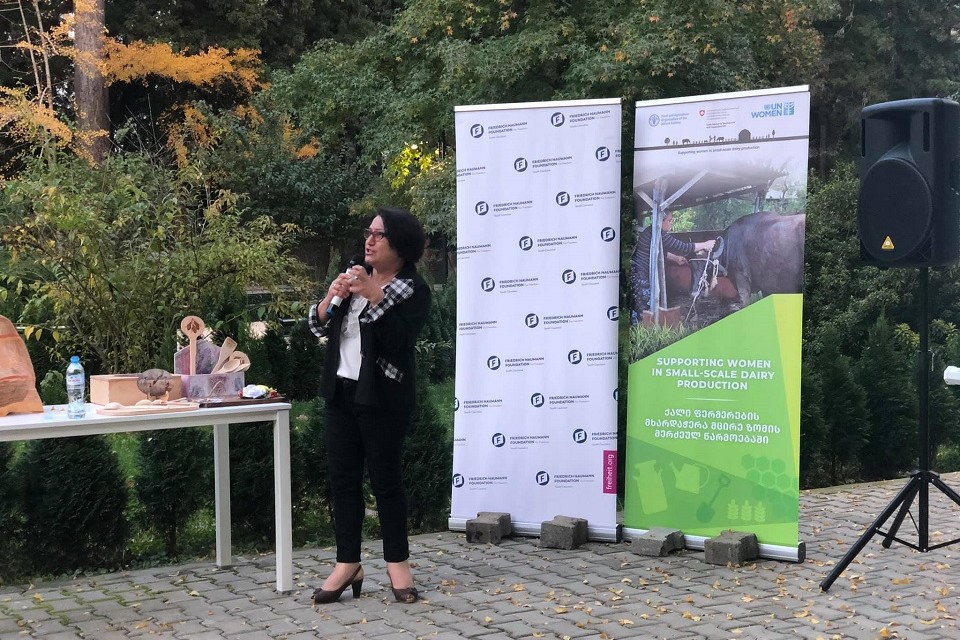 One of the participants of Pechakucha Nights, Ekaterine Farulava, shares her experience to the audience. Photo: UN Women

Rural women entrepreneurs play a special role in the social and economic development of communities and regions through their activities, although their contributions are often left without proper recognition. UN Women, on the occasion of the International Day of Rural Women on 15 October, focused on this problem by holding two events in Zugdidi in the Samegrelo region.

“Women Entrepreneurs for the Development of the Region” was the theme around which six local women entrepreneurs came together through the popular platform of PechaKucha Nights. In addition to talking about their own activities, in six-minute presentations they also told the audience about the important role that rural women entrepreneurs play in the development of their communities and regions. It is noteworthy that most of the women participating in PechaKucha started or developed their businesses with the support of UN Women projects and have also initiated various changes over time.

“I am glad that I was given a different opportunity to talk about the path I have taken since the day I started working. Such events strengthen me and other women entrepreneurs and give us new motivation,” said Ekaterine Farulava, one of the participants from Zugdidi who produces candied vegetables and dried fruits.

PechaKucha Nights is a platform that helps innovators, entrepreneurs, and initiators of change to tell audiences about their ideas and projects. It was devised by young designers in Tokyo in 2003 and is now held in more than 1,200 cities today. The event in Samegrelo was organized by the Tbilisi Startup Bureau and supported by UN Women, the Friedrich Newman Foundation for Freedom in the South Caucasus, and Liberty, a signatory to the UN Women’s Empowerment Principles (WEPs).

The PechaKucha event was preceded by a training conducted by WEPs signatory Liberty on carrying out milk production. The training covered issues of effective lending in entrepreneurship and was attended by 15 participants. It is noteworthy that Liberty, within the framework of implementing the WEPs, regularly holds training workshops for women on various topics and shares necessary knowledge with them.

The International Day of Rural Women was celebrated as part of a joint project between UN Women and the Food and Agriculture Organization of the United Nations (FAO) called “Supporting the Economic Empowerment of Women Farmers by Promoting Dairy Production through the Farmer Field School (FFS) Approach”. The project is implemented with the financial support of the Swiss Agency for Development and Cooperation.