According to the Social Institutions and Gender Index (SIGI) 2019 Regional Report for Eurasia, discrimination against Eurasian women is most pervasive within the family. Despite legal reforms promoting greater gender equality, deep-rooted social norms and practices inspire such discrimination. 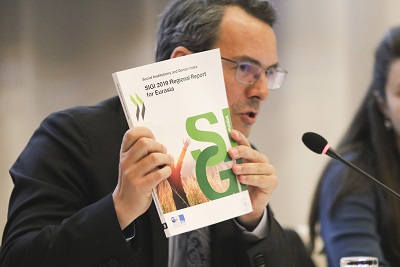 The new report was presented by the OECD together with UN Women and the Austrian Development Agency (ADA) on 15 May 2019 in Tbilisi.

The OECD Development Centre’s SIGI is an extremely important measurement of the situation regarding women’s de facto and de jure rights. The 2019 report provides a comprehensive analysis on gender discrimination in Eurasia, including the types and degree of such discrimination. To determine the extent of inequality between women and men, the SIGI assesses legislation, social norms and existing practice. The report focuses on issues such as women’s rights in families, domestic violence, access to financial assets and women’s civil rights.

The SIGI 2019 report indicates that the general level of discrimination in social institutions within Eurasia amounts to 24 per cent. Lorenzo Pavone, representative of the OECD, explained: “Deeply entrenched social norms are the most pervasive issue. In the Caucasus, for example, the undervaluing of the girl child has led to alarmingly unbalanced sex ratios. During the past 19 years, among ages 0-4, 170,000 girls are missing in Armenia, Azerbaijan and Georgia.”

“If gender parity in social institutions were to be achieved by 2030, it would increase regional GDP growth in Eurasia by 0.4 per cent every year, representing a gain of USD 2,961 per capita,” noted Gerhard Schaumberger, representative of the ADA in Georgia.

Tamar Sabedashvili, UN Women Deputy Country Representative in Georgia, stated: “The SIGI 2019 Regional Report for Eurasia recommends that governments should take effective measures to increase gender equality and protect the rights of women and girls. UN Women attaches huge importance to this index and expresses readiness to take further steps, together with governmental and non-governmental partners, towards the achievement of substantive gender equality.”

The presentation of the report was attended by experts and guests from the Eurasia region who were cordially invited specifically for this event. Members of the Parliament of Georgia and representatives of UN agencies, international and local NGOs and the Public Defender’s Office participated in the discussion.