With the support of UN Women, regular meetings continue between the participants of the Geneva International Discussions (GID) and civil society. These meetings aim at sharing information and mainstreaming women’s priorities and needs in the peace negotiations. 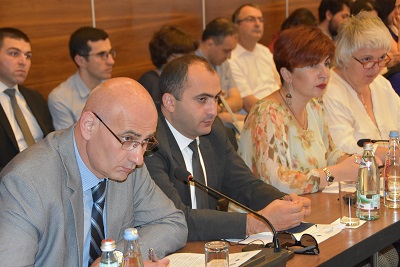 Participants of the meeting between the representatives of GID and CSOs; Photo: The Office of the State Minister for Reconciliation and Civic Equality

On 20 July 2018, the Ministry of Foreign Affairs discussed the main results of the 44th round of the GID with representatives from the Office of the State Minister for Reconciliation and Civic Equality, Government of the Autonomous Republic of Abkhazia, EU Monitoring Mission, Public Defender’s Office, civil society organizations and women’s rights activists.

David Dondua, Deputy Minister of Foreign Affairs and Head of the Georgian Delegation to the GID, gave a speech summarizing the post-conflict situation and the implementation of the peace process in the 10 years since the conflict.
The meeting’s focus was on how to actively engage women and address their needs in the processes of both the GID and the Incident Prevention and Response Mechanism.

Ketevan Chumbadze, Deputy Director of the Policy Department of the Ministry of Foreign Affairs, highlighted the achieved progress and spoke about improving the format of the meetings: “I am happy that men started to discuss engaging women in the peace talks; this is a step forward indeed. We must also point out that for the first time in the GID, as initiated by the UN Secretary-General, we will have a female co-chair, Ayşe Cihan Sultanoğlu, who will start working from the next round.”

Elene Rusetskaya, head of the CSO Women’s Information Center, remarked: “It would be our desire and initiative to meet with the new co-chair together with organizations working on women’s rights in the future. In addition, I would recommend that the voices of IDP and conflict-affected women be heard more clearly, in a format similar to today’s meeting.”

The meeting was held within the framework of the National Action Plan on the Implementation of the UN Security Council Resolutions on Women, Peace and Security. Approved by the Georgian authorities on 17 April 2018, the plan prioritizes the promotion of women’s participation in peacebuilding and conflict resolution processes.

As per the ceasefire agreement dated 12 August 2008, the Geneva International Discussions have been held four times each year since 15 October 2008 and are co-chaired by the UN, the EU and the OSCE.

Related News
22/10/2020
In the words of Nino Berikashvili: “It is central that women participate in peace processes”
24/03/2020
CSOs consider gender commissions to improve peace talks
24/03/2020
In the words of Ketevan Chumbadze: “Women involved in peace processes provide support for addressing the needs of conflict-affected women”
26/10/2017
Open Day on Women, Peace and Security stimulates meaningful discussions between beneficiaries and UN System representatives
19/07/2021
Civil society engaging in the drafting process of the new National Action Plan on Women, Peace and Security
END_OF_DOCUMENT_TOKEN_TO_BE_REPLACED