Georgian language has no sex prejudice, get it out of your head! - UN Women’s campaign to empower girls and women

Georgian language has no sex prejudice, get it out of your head! - This is the key message of UN Women Georgia’s new social campaign focused on promoting gender equality and empowering women through sport. 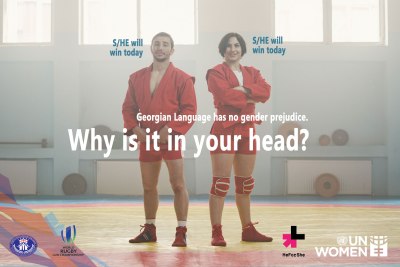 Women have no fewer achievements in sports, but when people start talking about a strong, fast and fierce athlete, many think that the subject is male. UN Women’s campaign defies this stereotype and shows that men and women can participate in sports equally, and that gender does not matter when it comes to achieving success and fighting for victory.

One of the sources of the idea for this social campaign was generated from the fact that there is no grammatical gender in the Georgian language, hence the key message focused on equality. The campaign was developed in partnership with the advertisement agency McCann Tbilisi. Within the framework of the campaign, videos and posters were prepared involving various male and female athletes from different sports, united around the idea of equality.

UN Women is implementing the social campaign in cooperation with the Ministry of Sports and Youth Affairs of Georgia. According to Vasil Liparteliani, the head of the Research and Analysis Division at the Ministry, enhancing the engagement of girls and women in various sports is one of the main priorities for this agency.

“Partnering with UN Women and this campaign is a great opportunity for us to reach out to the broader community and provide information to every family that it should be no surprise if a girl opts for any stereotyped ‘manly’ sports, for example weightlifting,” Mr. Liparteliani remarks. “We need to change the mindset that certain sports are intended only for girls or for boys. Girls’ involvement in sport is their decision entirely, and it should not be subject to public judgment.” 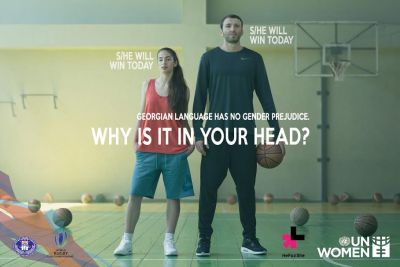 Currently, girls and women have equal rights to participate in all kinds of sports in Georgia. In some sports, such as chess, fencing and archery, Georgian women are very successful in the global arena, but only 10 per cent of girls and women in Georgia are involved in sport. One of the reasons is related to the widespread stereotypes that divide sports along masculine and feminine lines. Whether selecting, pursuing or even succeeding in a particular sport, girls are continually burdened with barriers and prejudices in their families and communities.

Nino Mikadze, a young rugby player and one of the participants of the campaign, has often experienced the attitude that “rugby is not the right place for girls”. Nino is 16 years old, lives in Darcheli village in Samegrelo region and envisages her success with her fellow girl teammates in this type of sport, which many people in Georgia think is “inappropriate” for women.

“When I started playing rugby, I faced much resistance,” Nino recalls as she tells her story in the video shot within the framework of the campaign. “Many people did not even know that there was such a thing as girls rugby. They were telling me, ‘How can you girls play rugby? This is not for girls, because a girl should be feminine.’ My fellow teammates and I still have to cope with this attitude. However, everybody can be successful in sports: both girls and boys.”

UN Women has a long-standing partnership in the field of sport. For many years already, various types of sport have served as an important means of communication for the organization in raising public awareness. It is worth noting that Georgian athletes are engaged in combating violence against girls and women and demonstrate their support for HeForShe, the UN Women solidarity movement for gender equality.

With the purpose of empowering girls through sports and enhancing their engagement in various types of sports, the partnership between UN Women and the Ministry of Sports and Youth Affairs will continue in the future. The campaign will expand and cover other areas together with sport.