Rugby Against Violence against Women at UN Sports Camp 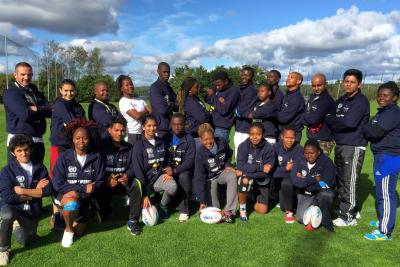 Young participants of the youth camp, Stockholm, Sweden
Photo: UN Women
In September 2015, 22 young women and men from Africa, Asia and the Middle East, have been given the opportunity of a lifetime at The Power of Sport Camp - a two-week youth camp currently taking place in Stockholm, Sweden. By combining education with sport, UN Camp Sweden aims to create leaders both on and off the field of play, that can tackle the world’s most pressing social issues and build a better society for all. The camp is based on the belief that sport, by its very nature, creates leaders who have the potential to bring about real change in their communities. Education is used to turn sport leaders into community leaders and to empower youth to go beyond the sports field, to create sustainable change and become Game Changers.

Two days of the camp (6-8 September) were focused on gender and sport and were facilitated by UN Women and Women Win. The UN Women Communications Specialist and Social Media Lead, Beatrice Frey, introduced UN Women and its work around the world to the participants, explaining the concept of gender. She went on to explain how sport can be a useful tool to empower women and girls, as well as what can be done to address challenges that girls face in accessing sport and opportunities beyond. 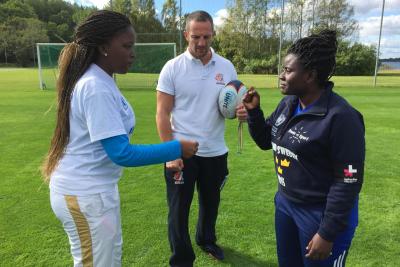 Youth camp participants learning rugby
Photo: UN Women
As a case study, the UN Women Component Manager and GRU Head of Social Projects, presented UN Women’s work in Georgia with the Georgian Rugby Union (GRU).  The work with the GRU is carried out under the umbrella of the United Nations Secretary General’s 'UNiTE to End Violence Against Women Campaign' (http://endviolence.un.org/), which uses rugby players as positive role models of healthy masculinity, to promote zero tolerance towards the practice of violence against women and girls and domestic violence (VAWG/DV). The project is implemented within the framework of the United Nations' 'Joint Programme to Enhance Gender Equality in Georgia' and is generously supported by the Swedish Government.

In-between lessons in the classroom, participants had a chance to learn rugby from a real pro, former Georgian national team player and Head of Social Projects of the Georgian Rugby Union, Nodar Andguladze, using UNiTE campaign branded rugby gear. Find out more about the camp at http://uncampsweden.org

In addition, on September 9-10, UN Women’s Component Manager and the GRU Head of Social Projects met with different organizations working in the area of prevention and response to VAWG/DV in Sweden. The meetings were a chance to learn from the experience and current practices of the Swedish system  tackling VAWG/DV. The knowledge and skills acquired will greatly aid future work to address existing gaps in the Georgian system, to enable enhanced prevention and response to VAWG/DV.

As a result, the 'Swedish National Strategy on Men’s Violence Against Women', will now inform the development of Georgia’s new National Action Plan on measures against domestic violence (to cover 2016 and subsequent years).  It will especially inform those sections regarding the prevention of VAWG/DV and monitoring and evaluation mechanisms for the National Action Plan. Furthermore, Swedish experience of service provision to DV and rape victims/survivors will be used as a basis for further development and enhancement of similar services in Georgia.

Lastly, UN Women established cooperative links with the AIK Football Club’s project 'FOOTBALL FOR ALL' (http://aikfotboll.se/) and the organization Men For Gender Equality (http://www.mfj.se/en/).  Such cooperation will help expand and reshape UN Women’s work with men and boys, using sport as a tool for the prevention of VAWG/DV. Using sport in this way will help challenge existing constructs of masculinity that encourage violent behavior in general and in particular, violence against women.

Related News
11/04/2022
Gender equality for a safe school environment
03/02/2022
In Georgia, police training improves response to violence against women
20/01/2022
Stand in the shoes of female victims of violence
10/01/2022
UN Women promoting gender-sensitive media coverage
11/12/2021
What would you tell me? - UN Women campaign against sexual violence
END_OF_DOCUMENT_TOKEN_TO_BE_REPLACED