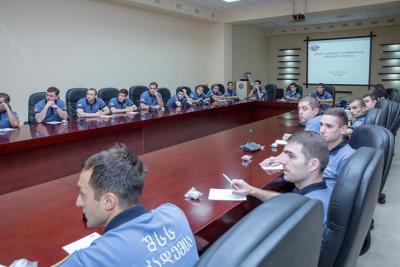 The Police Academy of Georgia is piloting a series of training on gender equality, for the students of its special professional educational programmes (for future district and patrol police officers). The training were developed with the support of UN Women (within the framework of the UN Joint Programme to Enhance Gender Equality in Georgia (UNJP)) in close collaboration with the Ministry of Internal Affairs of Georgia. The course is being delivered by Nodar Saakashvili, the Head of the Patrol Police Faculty of the Police Academy and Irina Zhvania, UN Women consultant. The course will introduce the students to concepts of gender, gender equality and gender equality policy framework.

Upon completion of the four pilot training sessions, the training module will be integrated into the special professional educational programmes for the patrol and district police inspectors of the Police Academy. The goal of the training is to enhance the knowledge of future police officers on equality before the law and principles of non-discrimination, by introducing them to relevant international commitments and domestic acts of law.

In addition, the training also seeks to increase the awareness and understanding police officers have of gender issues, to enable law enforcement officers to prevent this fundamental human right being infringed while carrying out their professional duties.

Related News
11/04/2022
Gender equality for a safe school environment
03/02/2022
In Georgia, police training improves response to violence against women
20/01/2022
Stand in the shoes of female victims of violence
10/01/2022
UN Women promoting gender-sensitive media coverage
11/12/2021
What would you tell me? - UN Women campaign against sexual violence
END_OF_DOCUMENT_TOKEN_TO_BE_REPLACED