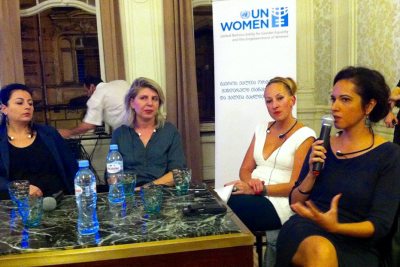 The gender balance in photojournalism has changed radically in recent years. Female photojournalists in the South Caucasus are the ones who have raised their voices to protect the rights of the most vulnerable groups in society. Through their work they have 'spoken out' about numerous social problems in the region. But what are the defining characteristics that a woman brings to this profession? This was the topic for the above roundtable discussion.

The artists shared their experiences, recalling how they 'infiltrated' an area of art that had traditionally been male-dominated and elaborating on their personal journeys towards public recognition; working frequently on controversial themes and challenging gender stereotypes.

'I heard a number of stories about family restrictions and violence against women when I was  a child. There was a girl in the neighborhood whose father had killed her mother, but we did not ask a question about it. As I grew, the number of stories of control and violence grew as well…I gathered the courage and started to work on Princess to Slave….I hope that the stories will bring some change to our society”. Photos from her book were displayed at the Festival.

UN Women's support for the event is part of a long-term campaign to promote zero-tolerance of violence against women and girls and domestic violence.

Related News
11/04/2022
Gender equality for a safe school environment
03/02/2022
In Georgia, police training improves response to violence against women
20/01/2022
Stand in the shoes of female victims of violence
10/01/2022
UN Women promoting gender-sensitive media coverage
11/12/2021
What would you tell me? - UN Women campaign against sexual violence
END_OF_DOCUMENT_TOKEN_TO_BE_REPLACED